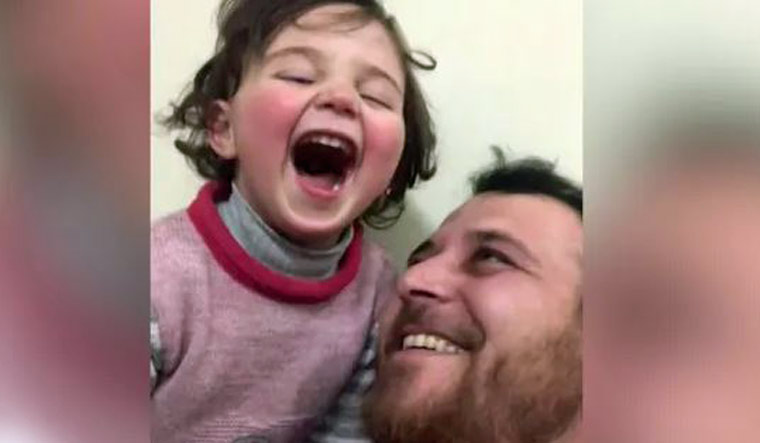 Three-year-old- Salwa has only ever known war. But now, when she hears the sound of a bomb, she laughs.

In a widely-seen video, one can see Salwa standing on the sofa, next to her father who is seated.

Abdullah al-Mohamed and the toddler play the bittersweet game they've played too many times.

In the video that causes much heartache, the cute toddler proudly guesses that the noise she heard is of a shell and not a plane.

“It'll fall now, and we can laugh,” she says. She jumps at the blast sound and laughs loudly.

Her slightly subdued father says, "That's funny, right? A shell?" His smile falters at the end of the video when Salwa looks away.

The video was filmed in Sarmada, where the family has taken refuge amid a renewed offensive by Syrian government forces and their allies on rebel-held northwestern Syria. Sarmada is a small town near Syria's border with Turkey.

The family fled their home in Saraqeb in Idlib province that fell to government forces earlier this month when the air raids became too "intense" to handle, al-Mohamed told Al Jazeera.

Salwa's father told Al-Jazeera that he devised the game so that his only child isn't scared by the frequent noises. He added that he wanted to associate the noise to something light and amusing.

According to the UN, some 900,000 people have been displaced in the area since the December offensive by Turkey that led to more intensive attacks on Syria.