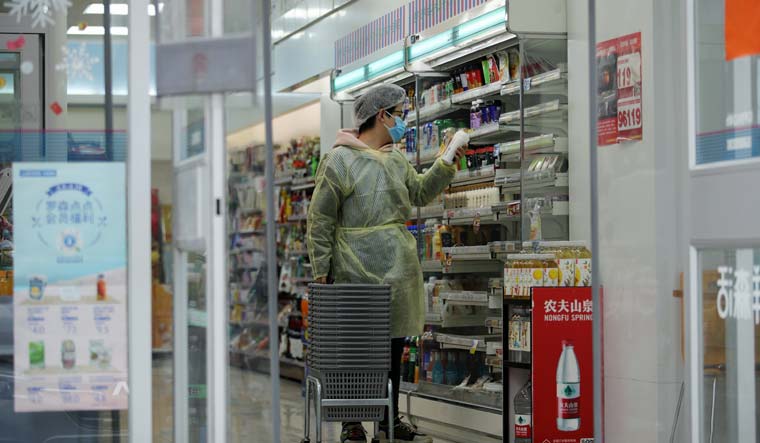 A worker is seen inside a convenience store following an outbreak of the novel coronavirus in Wuhan, Hubei province, China | Reuters

An Indian national has been diagnosed with the novel coronavirus in the UAE, bringing the total number of confirmed infection cases to eight, the country's health ministry has said.

The death toll in China's coronavirus outbreak has gone up to 1,016 while the confirmed cases of infection have soared to 42,638, Chinese health officials said on Tuesday.

The UAE Ministry of Health and Prevention (MoHAP) said on Monday that the Indian national was infected after he interacted with a recently diagnosed person.

"The Ministry of Health and Prevention announced today the eighth confirmed case of new coronavirus in the UAE, which is an Indian national who had interacted with a recently diagnosed person," it said in a tweet.

On Sunday, the ministry said that the two new patients, a Chinese national and a Filipino, had been diagnosed with the disease and were receiving medical care as per the highest health standards available in the country.

It said that all health facilities will continue to report any new cases suspected to have coronavirus.

Last week, a family of four who arrived from Wuhan for a holiday in Dubai were diagnosed with coronavirus. A fifth patient, who also arrived from the Chinese city, was confirmed to have been infected with the virus, but is reportedly in a stable condition.

China and countries around the world are scrambling to contain the spread of coronavirus which fiirst surfaced in Wuhan city in the Central Hubei province of China. Apart from China, two deaths have occurred in Hong Kong and the Philippines.

Besides Germany, Britain and Italy, other European nations with cases of the virus include France, Russia, Belgium, Sweden, Finland and Spain.