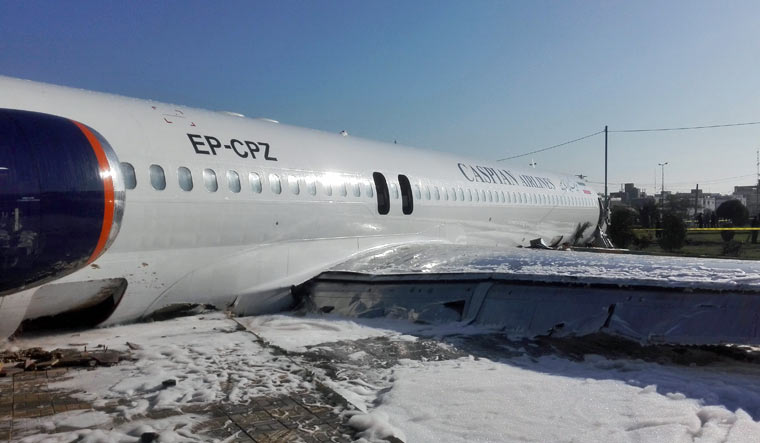 An Iranian passenger plane is seen after sliding off the runway upon landing at Mahshahr airport, Iran | Reuters

An Iranian plane ended-up on a highway adjacent to the airport, as it overshot a runway as it landed on Monday at the southwestern city of Bandar-e Mahshahr. There weren't any casualties.

"Arriving at Mahshahr airport, the pilot landed the aircraft too late and this caused him to miss the runway," the broadcaster quoted the head of Khuzestan province's aviation authority as saying.

This "caused the aircraft to overshoot the runway and stop in a boulevard" next to the airport, Mohammadreza Rezaeia said.

The Caspian Airlines plane was flying from Tehran's Mehrabad airport with 135 passengers on board. As per reports by State TV, all aboard the McDonnell, Douglass jet were safe.

A state TV reporter, who was also a passenger on board the plane said the aircraft's "back wheel had broken off, as we saw it was left on the runway" and said the plane had been moving with no wheels before it ground to a halt.

Authorities say that the incident is being investigated.

The Islamic republic had been planning to upgrade its decrepit fleet after long-standing US sanctions were lifted following the 2015 nuclear deal between Tehran and world powers.

But when US President Donald Trump pulled out of the accord in 2018 and reimposed crippling economic sanctions, the treasury department revoked licenses for Boeing and Airbus to sell passenger jets to Iran.