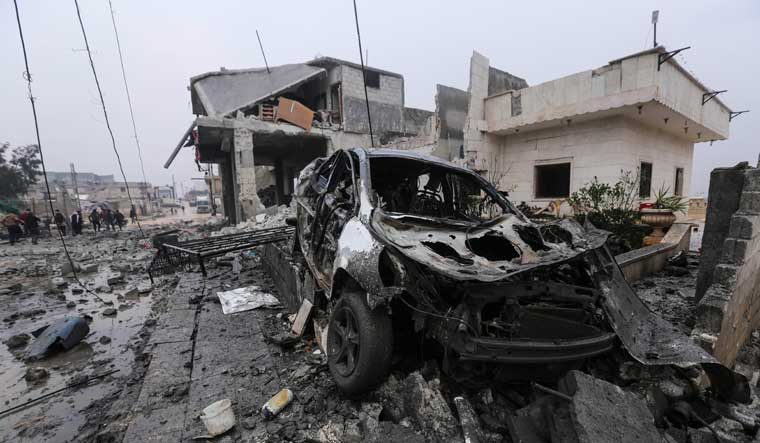 The spike in violence in the neighbouring provinces of Aleppo and Idlib follow so far unsuccessful diplomatic attempts to reduce hostilities in the flashpoint region, with the latest truce, in theory, going into effect less than two weeks ago.

Most of Idlib and parts of Aleppo province are still controlled by factions opposed to President Bashar al-Assad's regime, including a group that includes onetime members of Al-Qaeda's former Syria franchise.

The Damascus regime, which controls around 70 per cent of the country after nearly nine years of war, has repeatedly vowed to recapture the region.

On Tuesday, airstrikes by regime-ally Russia on a rebel-held region in Aleppo's western countryside killed eight members of the same family sheltering in a house, said the Syrian Observatory for Human Rights.

Six children were among those killed in the raid on Kfar Taal village, where three girls already died a day earlier in strikes, according to the Britain-based monitor.

Another seven civilians were killed in Russian airstrikes on western Aleppo and a southern region of Idlib.

"Over the past three days, the bombardment on Idlib and its surroundings, including in western Aleppo, has been exclusively Russian," said Observatory head Rami Abdel Rahman.

"They want to push rebels and jihadists away from the city of Aleppo and from the motorway linking Aleppo to Damascus," Abdel Rahman said.

The surge in violence comes despite a ceasefire announced by Russia earlier this month that never really took hold.

Last Thursday, Russia denied launching any combat operations in the region since the start of the ceasefire earlier this month.

Russia has thousands of forces deployed across Syria in support of the army, while a contingent of Russian private security personnel also operates on the ground.

Moscow's military intervention in 2015, four years into the Syrian conflict, helped keep Assad in power and marked a long, bloody reconquest of territory lost to rebels in early stages of the war.

Abdul Rahman said the latest spate in airstrikes could be a prelude to a land offensive in western Aleppo, as the regime and its allies continue their drive to shrink the last opposition-held pocket.

"The regime has massed reinforcements on the outskirts of the city of Aleppo," Abdel Rahman said.

The violence in northern Syria is escalating an already dire humanitarian situation, with aid groups warning of displacement on an unprecedented scale.

Idlib province alone is home to at least three million people, many of whom are in need of urgent humanitarian assistance.

According to the UN humanitarian coordination agency OCHA, almost 350,000 people have fled their homes since December 1, mainly northwards from southern Idlib, which has borne the brunt of the airstrikes.

The International Rescue Committee has warned another 650,000 people, mostly children and women could be forced from their homes if the violence continues.