Iran to examine downed plane's black box first; no plans to send it to Ukraine 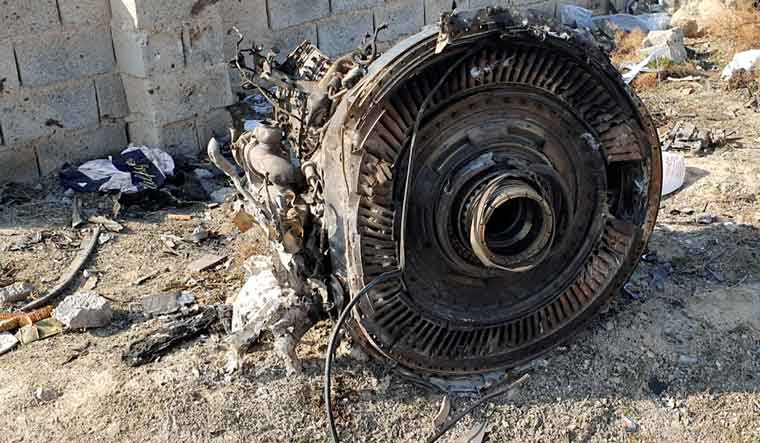 General view of the debris of the Ukraine International Airlines, flight PS752, Boeing 737-800 plane that crashed after take-off from Iran's Imam Khomeini airport, on the outskirts of Tehran, Iran January 8, 2020 | Reuters

Iran on Sunday denied a report that it was sending the black box from the downed Ukrainian International Airlines flight PS752 to Ukraine for analysis, saying that it would analyse the voice and flight data recorders itself.

The crash, which Iran initially denied being responsible for and then later said had shot down by accident, killed all 176 people on board, among whom were 82 Iranians and 62 Canadians.

Canada has called for the black box to be sent abroad, as have the countries whose citizens were lost in the disaster.

“We are trying to read the black boxes here in Iran. Otherwise, our options are Ukraine and France, but no decision has been taken so far to send them to another country, said Hassan Rezaifar, a director in charge of accident investigations at Iran’s Civil Aviation Organisation, to Iranian state news agency IRNA.

Earlier, Rezaifar was quoted by Tasnim news agency as saying that the black boxes could not be decoded in Iran and that they would be sent to Ukraine.

Members of Canada’s Transportation Safety Board had sent two investigators for a six-day visit to Tehran to investigate the wreckage, saying that Iranian investigators were “cooperative and helpful”.

There are no plans currently as to how and when the black box data would be downloaded, or whether it would be sent to another country at all.

The Boeing 737-800 was shot down after taking off from the Iman Khomeini International Airport on January 8, while en route to Kyiv. The incident took place on the morning that Iran launched missile strikes on US installations in Iraq in retaliation against the killing of General Qassem Soleimani.

The bodies of the 11 Ukrainian victims from the crash were returned home on Sunday in a ceremony at Kyiv airport, attended by Ukrainian President Volodymyr Zelenskiy.

The revelation that Iran had shot the plane down, during a period of heightened tensions with the United States, came after several official denials and sparked nationwide protests in the country.