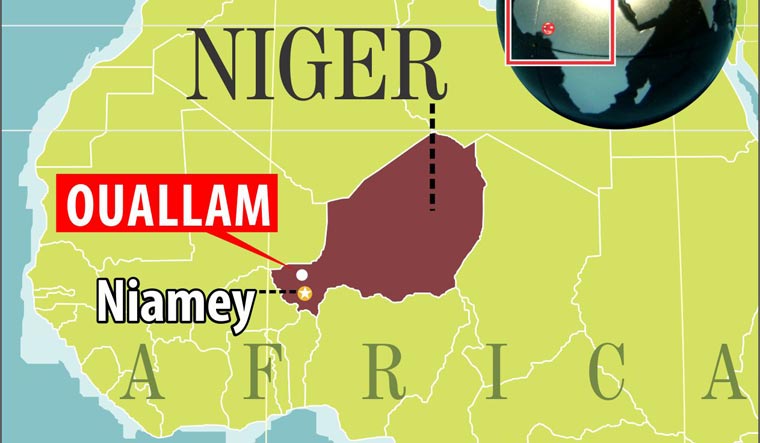 The region where the attacks took place | PTI Graphics

A deadly attack on a Niger military base has killed at least 71 and wounded 12, according to reports, with “a large number of militants” killed by Nigerien security forces according to Defence Minister Issoufou Katambe.

The attacks, believed to have been led by Islamist militants, took place on Tuesday evening at a military camp near the Nigerien border with Mali, 45km from the town of Ouallam. No group has taken responsibility for the attacks so far.

According to Nigerien army spokesman Colonel Boubacar Hassan, several hundred militants attacks the base in Inates over three hours, the same region where ISIS attacks in May and July killed nearly 50 soldiers.

“The combat [was] of a rare violence, combining artillery shells and the use of kamikaze vehicles by the enemy,” he said, according to Reuters.

These would be the deadliest attacks on the Nigerien military in the country’s history.

The attacks are the latest in a wave of killings in the West Africa’s Sahel region South of the Sahara, with Malu, Burkina Faso and Niger the hardest-hit. According to Reuters, hundreds have fled the area for the capital of Niamey after a spate of killings in the course of the year.

In the wake of the attacks, Niger and France have postponed a scheduled G-5 Sahel meeting with French President Emmanuel Macron that was to be held on Thursday. It will now be early in early 2020, instead.

The G-5 Sahel comprises Burkina Faso, Chad, Mali, Mauritania and Niger. 4,500 French troops are deployed in the region under Operation Barkhane which began in 2014.

Nigerian President Mahamadou Issoufou returned to Niamey from the Aswan Forum on African peace and security in Egypt after the attacks, holding a meeting with his security council according to the Africa Times.

Attacks are usually conducted by Jihadists from ISIS or Al Qaeda, two groups that still have a presence in the region.