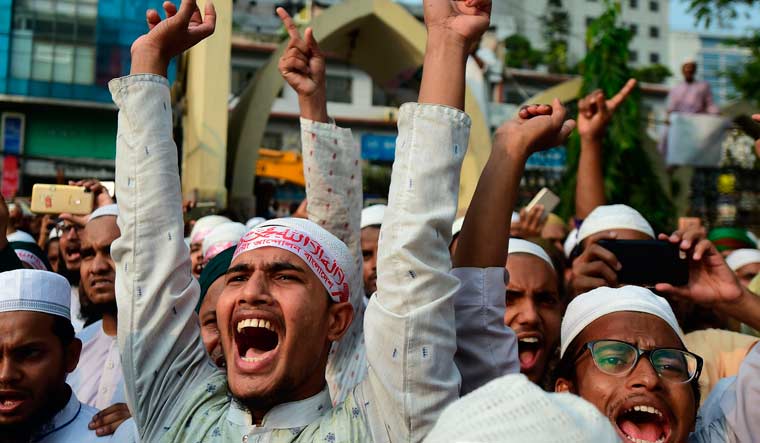 A Muslim outfit in Bangladesh on Monday demanded the death penalty for a Hindu man over an allegedly blasphemous post on Facebook.

The demand to enforce the death penalty against Biplob Chandra Baidya Shuvo, a Hindu youth, was made by the Shorbodolio Muslim Oikya Parishad. Thousands of supporters of Muslim groups participated in protests in Bhola district, over 100km away from Dhaka, on Sunday to demand action over the contentious Facebook post. Four people were killed when the police opened fire to disperse the protesters.

Biplob approached the police in Borhanuddin upazila in Bhola on October 19, to complain that his Facebook account had been hacked. The blasphemous post allegedly defamed Allah and Prophet Mohammad. Police took Biplob into custody and later also detained two Muslim youth—Emon and Sharif—who were suspected to have hacked Biplob's Facebook account.

Even though the police confirmed by Sunday evening Biplob was not behind the blasphemous post, the Muslim Oikya Parishad continued to demand the death penalty for him.

The Dhaka Tribune quoted Muslim Oikya Parishad joint secretary Maulana Mizanur Rahman as saying, “We blame Biplob. He should have at least declared through someone else’s Facebook profile that his account was hacked. But he did not do that. He went to the police only [after] the conversation went viral on Facebook.”

Rahman also blamed the police and government on not clarifying on the arrest of the two suspected hackers and instead claiming “Biplob is not responsible”.

The police registered a case against 5,000 unidentified people over the protests on Sunday. A local police official in Bhola said around 30 security personnel were injured in the violence on Sunday. In addition to the death penalty against Biplob, the Muslim Oikya Parishad has sought the transfer of local police officials from Bhola, free treatment for the injured in the Sunday violence, compensation for the victims and framing of a law to punish those guilty of blasphemy.

Several Islamic groups and the opposition BNP have called for protests this week over the blasphemous Facebook post. The government has deployed additional police personnel as well as units of the Border Guard Bangladesh and Coast Guard to enforce a ban on public gatherings.

Bangladesh Home Minister Asaduuzzaman Khan Kamal had said on Monday the police had opened fire in self-defence. He claimed around 300 people attempted to target a building where police officials were based. The minister said the government was seeking assistance from Facebook to trace who had made the blasphemous post. “We have sent necessary information to Facebook’s Singapore office and details will be known within two or three days,” he told Dhaka Tribune.

On Monday, Sheikh Hasina warned of stern action against those inciting violence.

The police has taken Biplob into protective custody, after he lodged a complaint with them, alleging that his Facebook account had been hacked.

"Punitive measures must be taken against anyone who wanted to disrespect Prophet Mohammad, but at the same time if anyone tries to frame another person, action will be taken against them as well," the prime minister said.

Hasina said, "How can a Muslim write something bad about the prophet and use it to frame someone else?"