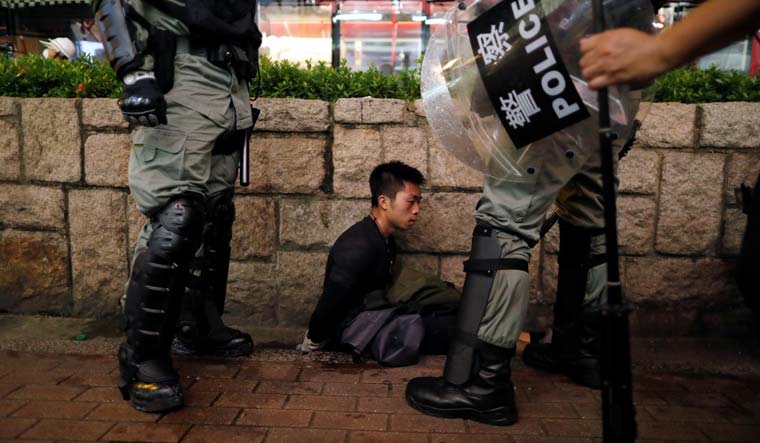 The Hong Kong police have arrested two of its officers who tortured an old man in a hospital bed, after CCTV footage of the act emerged and went viral on social media platforms.

Speaking on the matter, police spokesperson John Tse said, “It is clear that the actions committed by the police officers concerned are unlawful… So far, two involved officers were arrested for assault occasioning actual bodily harm."

Tse promised an independent probe would take place, adding that "police officers are never allowed to use abusive force for their own sake.”

The video, which was dated to late June, shows two officers approaching an old man in a hospital bed, taking turns to physically abuse him as the stuffed his mouth with a cloth.

The old man, 62, was slapped and hit in the face, genitals and stomach by the officers, who also used their batons. The New York Times reported pro-democracy lawmaker Lam Cheuk-ting as saying that the man had attacked a police officer while drunk, but that the was not part of the protest movement.

The incident took place at the North District Hospital on June 26. The son of the old man reported the incident to the police, but no action was taken for weeks thereafter.

It has added to the Hong Kong protester’s grievances over police brutality, with pro-democracy protesters calling for an independent inquiry into the policemen’s actions.

Over a million Hong Kong protesters filled the streets of the city on Monday and Tuesday. The city’s Chief Executive, Carrie Lam, whose resignation is at the centre of the protester’s demands, warned that the Hong Kong economy faces the risk of a downturn, with GDP data from the previous week showing a slowdown in growth from 2-3 per cent to 0-1 per cent.

The United Kingdom expressed concern after a Consulate worker at the British Embassy was detained while on his way to Hong Kong from the neighbouring city of Shenzhen. Simon Cheng, who local media reports is a Trade and Investment officer at the Scottish Development International section of the consulate, has been missing since August 8. Speaking to news site HK01, his girlfriend said his last messages to her were from when he was passing through the border, asking her to “pray for me”.