Imran appreciated ICJ decision not to “acquit, release and return” Jadhav to India 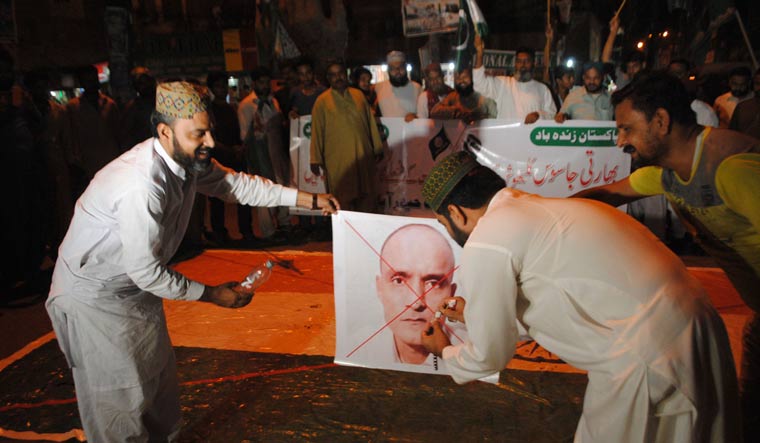 Protesters prepare to burn a poster of an alleged Indian spy Kulbhushan Jadhav in Hyderabad, Pakistan, after the ICJ ruling | AP

Imran tweeted on Jadhav a day after the International Court of Justice asked Pakistan to review the death sentence imposed on Jadhav in April 2017. The ICJ ruling, which also required Pakistan to grant consular access to Jadhav, is a diplomatic victory for India.

Appreciate ICJ’s decision not to acquit, release & return Commander Kulbhushan Jadhav to India. He is guilty of crimes against the people of Pakistan. Pakistan shall proceed further as per law.

Imran, however, chose to “appreciate” the ICJ decision not to “acquit, release and return” Jadhav to India. In a note of defiance, Imran tweeted, “He is guilty of crimes against the people of Pakistan. Pakistan shall proceed further as per law.”

Jadhav, who was arrested in 2016, was found guilty of espionage and terrorism by Pakistan in a trial India decried as a sham. The Indian government has alleged Jadhav was kidnapped by Pakistan's proxies in Iran and taken to Pakistan.

Prime Minister Narendra Modi welcomed the ICJ ruling on Jadhav. In a late-night tweet on Wednesday, Modi declared, “truth and justice have prevailed. Congratulations to the ICJ for a verdict based on extensive study of facts. I am sure Kulbhushan Jadhav will get justice...”.

The Kulbhushan Jadhav case has been a major irritant in India-Pakistan ties in the past two years. Interestingly, of the 16 judges of the ICJ, 15 voted in favour of India's demand to suspend the death penalty against Jadhav, with only a Pakistani judge opposing it.