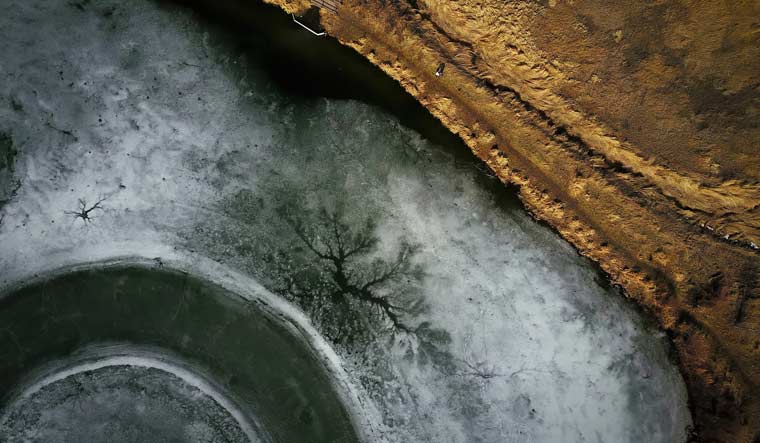 A time-bomb of carbon emissions, permafrost contains tons of greenhouse gases buried underneath its frozen soil | Image via Pixabay

In vast swathes of land across Northern Europe and Northern America, the frozen soil contains layers of ice that date back to the last Ice Age, trapping over 1600 billion tonnes worth of greenhouse gases like methane, carbon dioxide and nitrous oxide underneath.

The existence of this permafrost was known for years, but it was only recently that its potential contribution towards climate change was taken into account. When the ice thaws, it releases tremendous quantities of greenhouse gases into the atmosphere. Now, a new study published in Nature has found that the rate of thaw can vary between sheets, with some permafrost regions experiencing rapid "collapse".

According to the study, led by Merritt R. Turetsky, one-fifth of frozen soils at high latitudes are thawing, in regions such as Alaska, Siberia, Canada and Sweden. In these areas, the risk of permafrost collapse is significantly higher, due to factors like large quantities of ice which can trigger landslides when thawed. In icy swatches that have been frozen since the last Ice Age — termed Yedoma — the quantity of GHG buried within could be to the tune of 130 billion tonnes, or a decade's worth of human emissions.

The study, supported by the Permafrost Carbon Network as a part of the Study of Environmental Arctic Change (SEARCH), estimated that permafrost thawing in areas like lowland lakes, wetlands and upland hills, could release "between 60 billion and 100 billion tonnes of carbon by 2300. This is in addition to the 200 billion tonnes of carbon expected to be released in other regions that will thaw gradually."

The distinguishing factor is permafrost collapse, which results in a rapid release of emissions like methane (which has a great global warming impact than CO2). According to the study, "Although abrupt permafrost thawing will occur in less than 20% of frozen land, it increases permafrost carbon release projections by about 50%." It adds that the combined impact of gradual and rapid thawing of permafrost "could be twice that expected from current models".

Given the varying conditions around permafrost regions and the understudied aspects of whether such emissions can be recaptured by the plants around it, a short term estimation of additional carbon releases due to permafrost is not available. However, it puts doubt on whether the IPCC's target of net zero emissions globally by 2050 is now under-par.

Other targets, which include reducing emissions by 2030 — ie in 135 months — have also been put to doubt by the permafrost revelations. Is the accepted target of reducing emissions to under two degrees celsius of global warming still possible?

The issue with permafrost was covered in other studies as well. Writing in the World Resources Institute (WRI) blog, Dan Lashof talks of the catastrophic, cascading effects of runaway climate change if the issue is not tackled before a tipping point is reached. After a point, even if human emissions reduce, the environment will trigger exponentially greater climate change and global warming, putting the matter firmly out of human hands.

The permafrost factor adds to the impetus of acting on climate change. Another study that was published in Nature in 2017 estimated that every degree of warming would result in the loss of about four million square kilometres (more than the area of India) of permafrost.

Turetsky's study ends with a call for more data on the subject, and for policymakers to consider permafrost-triggered-emissions under the category of "unresolved climate feedbacks".