Trump praises immigrants in State of the Union address 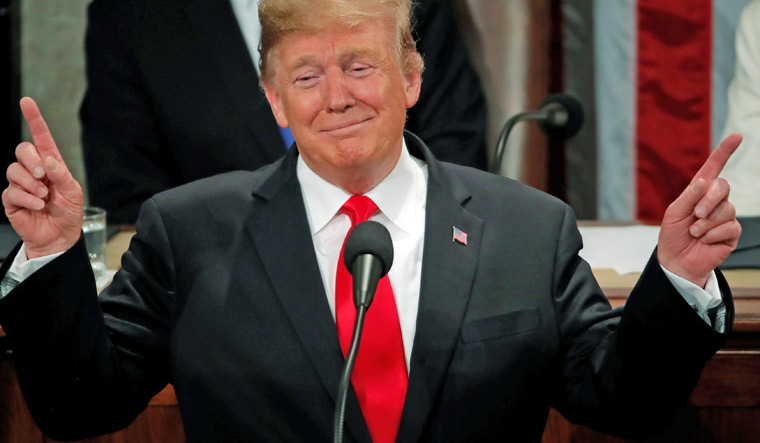 President Trump delivered his second State of the Union address on Tuesday. The address comes weeks after the month-long shutdown. Democrats invited furloughed workers who were affected during the partial shutdown to the address. Here are the important takeaways from the speech.

Trump hit out at the 'witch hunt' he was being subject to
President Trump hit out at what he called the "ridiculous partisan investigations" into his presidency. Though Trump did not name the specific probes, his reference was seen pointed towards Mueller's probe to ascertain whether the Trump campaign colluded with Russia ahead of the 2016 elections. The president has long branded the special counsel's probe a "witch hunt". "An economic miracle is taking place in the United States and the only thing that can stop it are foolish wars, politics or ridiculous partisan investigations," he added.

The President talked about a second meeting with Kim Jong-un at Vietnam during his address. “As part of a bold new diplomacy, we continue our historic push for peace on the Korean Peninsula. Our hostages have come home, nuclear testing has stopped, and there has not been a missile launch in 15 months. “Much work remains to be done, but my relationship with Kim Jong-un is a good one,” he added. The summit will take place on February 27 and 28. The two leaders met last year in Singapore. Post this, North Korea has refrained from overtly provocative actions like testing nuclear warheads or ballistic missiles. But it has yet to agree to actually give up any piece of its atomic arsenal.

The President also praised legal immigrants and wished people would enter the United States on merit. "We have a moral duty to create an immigration system that protects the lives and jobs of our citizens". The lawless state of the southern Mexico border is a threat to the safety, security and financial well-being of all Americans, he said. "This (moral duty) includes our obligation to the millions of immigrants living here today, who followed the rules and respected our laws. Legal immigrants enrich our nation and strengthen our society in countless ways. I want people to come into our country, but they have to come in legally," said the US President. Trump said his administration has sent to Congress a common sense proposal to end the crisis on the southern border. He said that the working class Americans pay the price for mass illegal migration — reduced jobs, lower wages, overburdened schools and hospitals, increased crime, and a depleted social safety net. He also reiterated, “Walls work and walls save lives.”

Called to end politics of revenge

Trump also called on a divided Congress to refrain from "the politics of revenge" and "partisan investigations" into his presidency as he appealed for unity. He touted economic gains during his first two years in office as well as legislative wins on issues like criminal justice reform. Trump warned that deepening partisan tensions undermine America's progress. "Together, we can break decades of political stalemate. We can bridge old divisions, heal old wounds, build new coalitions, forge new solutions and unlock the extraordinary promise of America's future." He also added that "We must be united at home to defeat our adversaries abroad."

Reaffirmed his stand on Venezuela and on withdrawal of troops

Trump during his speech also reiterated the US opposition to embattled Venezuelan President Nicolas Maduro. Last month, Trump recognized opposition figure Juan Guaido as the legitimate leader of Venezuela amid the country's economic turmoil and political strife that has sparked a massive refugee crisis. Trump said that the US "will never become a socialist country". Trump celebrated the defeat of the Islamic State, adding it was time to bring US troops home from conflict zones in the Middle East. "Great nations do not fight endless wars," he said. Continuing the theme of withdrawal, Trump thanked US troops for their service in Afghanistan and said that the time had now come for a political solution to the problem. Trump described Iran as a "radical regime" and "the world's leading sponsor of state terror," adding: They do bad, bad things.

Acknowledged women in the Congress

Trump in his address also acknowledged women power in the Congress. “ All Americans can be proud that we have more women in the workforce than ever before,” he said, beginning to draw an almost surprised, positive reaction from Democrats, “and exactly one century after the Congress passed the constitutional amendment giving women the right to vote, we also have more women serving in the Congress than ever before,” the President said. Most women in the Congress including house speaker Nancy Pelosi wore white to the State of the Union address which highlighted the number of the fair sex in both the parties, besides being a show for female unity.