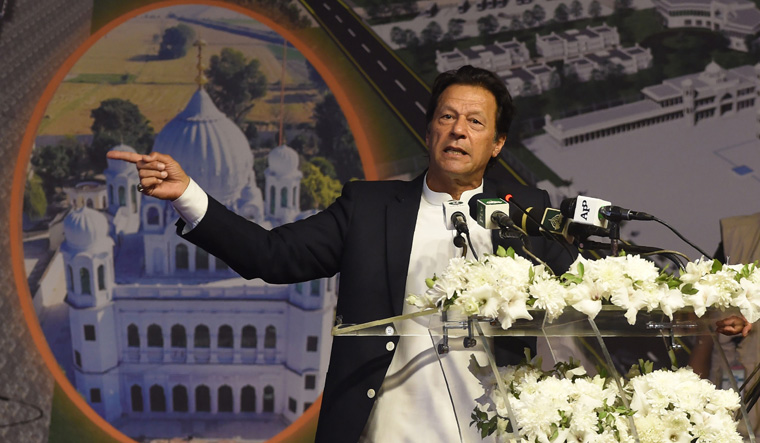 Prime Minister Imran Khan Thursday conceded that it was not in the interest of Pakistan to allow its territories to be used for terror activities in other countries and said he was ready to hold talks with his Indian counterpart Narendra Modi to bring peace between the two neighbours.

Khan's remarks came a day after External Affairs Minister Sushma Swaraj categorically ruled out the possibility of holding talks with Pakistan unless it stops cross-border terror activities in India.

Referring to his call for improving ties with India, Khan at the same time said one-sided initiative will not last long and that Pakistan was willing to wait for reciprocity from India till general elections are held there.

"It is not in our interest to allow use of Pakistan's territory for terror outside our country," Khan, who completed 100 days in office Thursday, told a group of Indian journalists.

After a spate of terror attacks by Pakistan-based terror groups including on the Pathankot air force base, India refused to engage with Pakistan till it contains cross-border terrorism.

Khan said that people in Pakistan want peace with India and he will be happy to meet Modi and talk to him on any issue, adding the mindset of Pakistani people have changed and they want peace.

"I am ready for talks on any issue. There can't be a military solution for Kashmir," he said, adding "nothing is impossible" when asked whether it is possible to resolve the vexed Kashmir issue.

Asked whether his government will take action against India's 'Most Wanted' terrorist Dawood Ibrahim, Khan evaded a direct reply saying, "We can't live in the past. We should leave behind the past and look forward. We also have a list of wanted people in India."

On whether Pakistan will show some "grand gesture" like taking action against Mumbai attack mastermind Hafiz Saeed to make the ground for normalisation of relations with India, Khan skipped a direct response, but suggested that India's response to peace overtures was important for any possible grand gesture.

"There are UN sanctions against Hafiz Saeed and his organisation. The sanctions are severe. There is already a clampdown on him," he said.

Saeed's Jamat-ud Dawah (JuD) was declared as a foreign terrorist organisation by the US in June 2014. The group is a front for the Lashkar-e-Taiba terror outfit.

Saeed is the co-founder of the Lashkar-e-Taiba, which was responsible for the attacks in which 166 people were killed in November 2008. He was put under house arrest after the 26/11 attack, but was freed by a court in 2009.

On trail of the 26/11 accused, Khan said he inherited the issue and that the case is sub judice.

"I canot take responsibility for the past," he said.

Elaborating on the Kashmir issue, Khan said, "India should look at the Kashmir issue differently and not as a territorial issue. If nothing else, we want the government of India to o something for people of Kashmir."

On India taking objection to his mentioning of the Kashmir issue during his address at the ground-breaking ceremony of the Kartarpur Corridor on Wednesday, Khan said he was only trying to explain that a solution to the issue is not impossible if both sides sit together and talk.

The Pakistan Prime Minister emphasised that Kashmir was a major issue between the two countries and said even former prime minister Manmohan Singh few years back had commented that the Kashmir issue was holding both India and Pakistan back.

Khan also referred to meeting with Atal Bihari Vajpayee and quoted the former prime minister as saying that if the BJP had not lost 2004 elections, there was a possibility of resolution of the Kashmir issue.

"I said nothing is impossible. In that context, I mentioned Kashmir (at Kartarpur event)," said Khan.

"From the very first day I have been saying that we want to improve ties with India Why would anyone be scared of dialogue," he said.