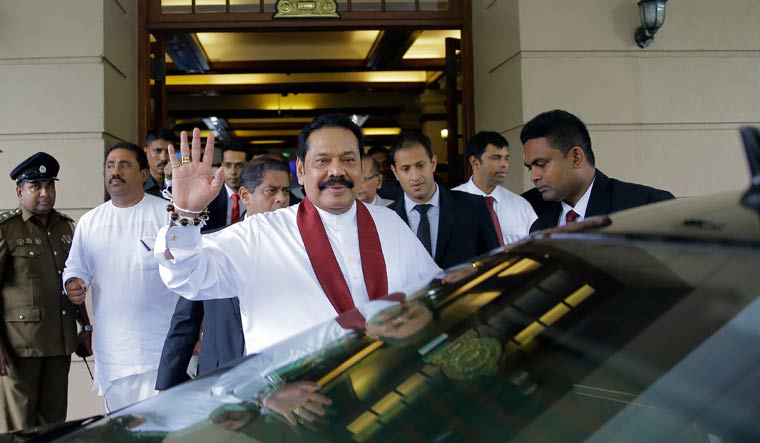 In a boost for newly-appointed Sri Lankan Prime Minister Mahinda Rajapaksa, a lawmaker from the main Tamil party defected to the premier's side and was made a minister on Friday even as President Maithripala Sirisena agreed to summon Parliament on November 7 for a floor test to end the political turmoil.

Rajapaksa claims he now has enough numbers to prove his majority and at least five of ousted premier Ranil Wickremasinghe's men have defected to his side.

The current suspension of Parliament is seen as key to Rajapaksa negotiating for enough defections.

Rajapaksa was further bolstered by the defection of TNA MP S Vilenthiriyan from the eastern district of Batticaloa, who was made the deputy minister of eastern development.

Wickremasinghe's United National Party said they have handed over a motion of no confidence against new Prime Minister Rajapaksa.

The Rajapaksa-Sirisena combine has 96 MPs in the 225-member assembly, which is 17 short of the 113 required working majority.

Meanwhile, Parliament Speaker Karu Jayasuriya said that Sirisena has agreed to summon the legislature on November 7, in a fresh twist to the ongoing political crisis after former strongman Rajapaksa replaced Wickremesinghe as prime minister.

There was confusion since Thursday on the date when the parliamentary deadlock would end as Sirisena had suspended the sittings until November 16.

Controversially-appointed Prime Minister Rajapaksa said Thursday that Parliament would be convened on November 5. This was later denied by Rajapaksa loyalists.

Sirisena's party said on Thursday night that Parliament will not be convened before November 16, contradicting Rajapaksa's office.

Wickremesinghe has refused to accept his dismissal, claiming to be the country's legitimate premier. He argues that he cannot legally be removed until he loses the support of Parliament and called for a floor test to prove his majority.

The President was under increasing political and diplomatic pressure to reconvene Parliament.

One UNP lawmaker has also offered support to Rajapaksa taking his tally to 101.

On Tuesday, angry protests rocked Sri Lanka's capital as thousands of demonstrators gathered for a rally organised by Wickremesinghe's party against what it said was a "coup" by President Sirisena.