Pakistan: Imran Khan to be sworn in as PM before Aug 14 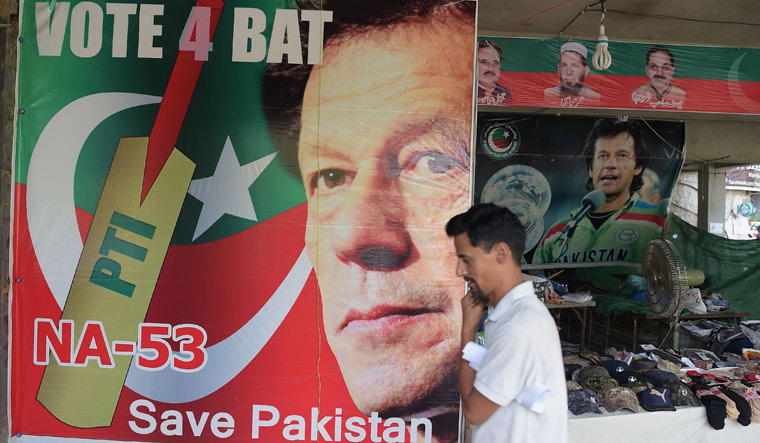 Pakistan's cricketer-turned politician Imran Khan's party Pakistan Tehreek-e-Insaf (PTI) swept to an emphatic victory in the polls, but is short of a majority | AFP

Imran Khan will be sworn in as Pakistan's new Prime Minister before the country's independence day on August 14, his party has announced as it is trying to reach out to smaller parties and independents to form the next government.

Though the Pakistan Tehreek-i-Insaf (PTI) has emerged as the single largest party in the National Assembly after the July 25 elections, the party is still short of numbers to form its government on its own.

"We have done our homework and he will take oath as Prime Minister before August 14, Haq said.

But even as the party prepares for the swearing in, Voice of Karachi Chairman Nusrat Nadeem urged that fresh polls take place under UN supervision as Khand and his party PTI had been treated like the chosen one whereas, his political rivals were subjected to a systematic campaign of hurdles, intimidation, and defamation. Voice of Karachi is a US-based interest group that represents Urdu-speaking Mohajirs and other people in urban Sindh to get them their due fair in Pakistan where Mohajirs have been mistreated since 1947.

He also alleged that Pakistani military establishment used Pakistani judiciary and the so-called anti-corruption body, NAB, against Imran Khan's political rivals and even jailed his main political foes, the former prime minister Nawaz Sharif and his daughter just a few days before the polls. Nusrat also said that barring PTI, every other political party in Pakistan is complaining of massive and organized rigging and have categorically rejected the results.

According to the complete preliminary results announced by the ECP, the PTI has obtained 115 general seats 12 short of a simple majority while the PML-N and PPP have won 64 and 43 seats, respectively.

Pakistan's NA - the lower house of Parliament — comprises a total of 342 members, of which 272 are directly elected. A party can only form the government if it manages to secure 172 seats in total.

Meanwhile, political activities are at full swing and parties are holding open meetings and secret parleys to arrange the political chessboard.

Pakistan's two major parties — the Pakistan Peoples Party (PPP) and the Pakistan Muslim League— Nawaz (PML-N) are expected to meet in a couple of days to devise a joint strategy in a bid to give a tough time to the PTI in parliament, the media reported.

The Pakistani electronic media throughout the day yesterday kept on mentioning names of possible candidates for key government offices and possible members of the federal cabinet.

Ghulam Sarwar Khan of Taxila has also won two NA seats by defeating former interior minister Chaudhry Nisar Ali Khan and he will also have to vacate one seat.

If the PTI decides to nominate him again for the office of the chief minister, he will also have to vacate the NA seat which means that the party's seats will be reduced to 109.

It was after these calculations that the PTI leadership has now decided to reach out to other smaller groups and independents since the party has already declared that it will not join hands with the PPP and the PML-N, the media said.

The media also reported that Former secretary general of the PTI Jahangir Tareen had established contacts with independents and the Muttahida Qaumi Movement-Pakistan (MQM-P) which has won six seats. There are 13 independents who have won the NA seats.

If the PTI obtains support of the GDA, MQM-P, PML-Q and the Awami Muslim League, the number of its seats will become 122 still 15 short of the required numbers, which is more than the independents who have won the elections.

Other parties which will have representation in the NA are the Balochistan National Party-Mengal (BNP-M) with three members, and Jamhoori Watan Party, Awami National Party and Pakistan Tehreek-i-Insaniyat with one seat each.

Though the PPP and the PML-N have also rejected the elections results, sources in the two parties told Dawn that they would not support the Muttahida Majlis-i-Amal (MMA)'s call for boycotting the oath-taking session of the National Assembly.

We have decided to play the role of an aggressive opposition in parliament, said a senior PML-N leader who had participated in the MMA-convened multiparty conference in Islamabad on July 27.

A senior leader of the PPP said so far they had not finalised any strategy for the elections of key parliamentary offices.

PPP chairman Bilawal Bhutto-Zardari yesterday formed a committee to engage with political parties to discuss the way forward in the post-poll scenario.

The sources said contact had been established between the PPP and the PML-N and the leaders of the two sides were expected to hold a meeting in a few days.