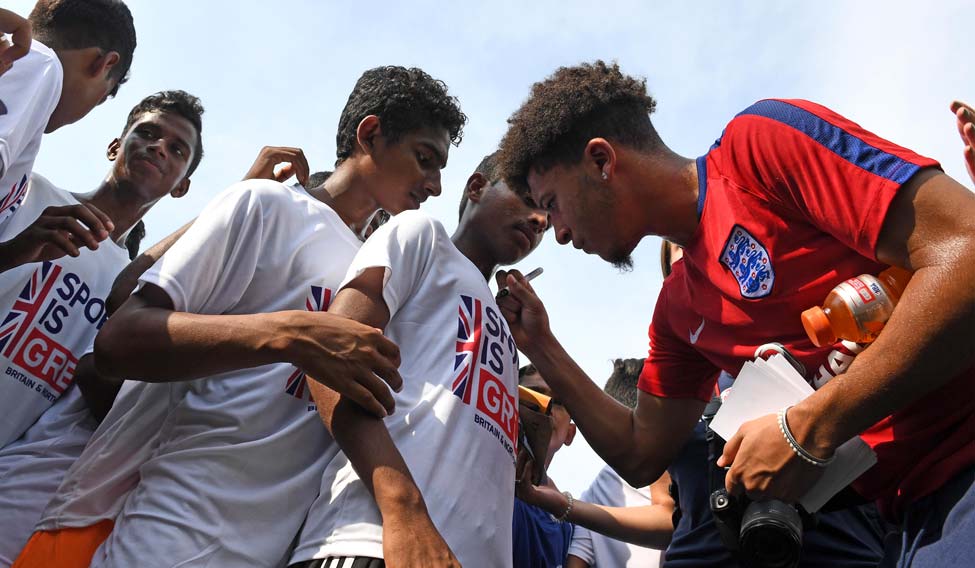 Players and coaching staff of the England U-17 football team visited The Newtown School in Kolkata to play with children from various backgrounds.

The six players were welcomed with flowers and shawls by the school and went on to showcase their skills on the school’s artificial turf. The team also interacted with the children present, giving them tips on the game.

Apart from the school students, there were also children from two UK-backed initiatives—‘Kolkata Goalz’ and ‘DOSTI Sports for Peace’—which use sports to support underprivileged children.

Both boys and girls from the school played with the England squad, interacted with them and took selfies. Jadon Sancho and Angel Gomes seemed to attract the most attention, with the pair having shone in the tournament so far. Sancho seemed to enjoy himself, mingling and playing with the children.

While Kolkata Goalz helps connect young, underprivileged children with local authorities through sport, the DOSTI programme engages such children and helps them make positive changes to their behaviour and lifestyle.

Earlier, England coach Steve Cooper said that he felt it was really important that his boys do some community work while in Kolkata, to give something back to the warmth the team has received from the city.

“I want them to be visible in the community, to show some respect for all that the city and its people has done for us,” he had said.

England, which is at the top of Group F of the FIFA U-17 World Cup, won their first two games and will play Iraq in their final group game on October 14.

Your form could not be submitted.
This browser settings will not support to add bookmarks programmatically. Please press Ctrl+D or change settings to bookmark this page.
Topics : #FIFA U-17 World Cup | #football