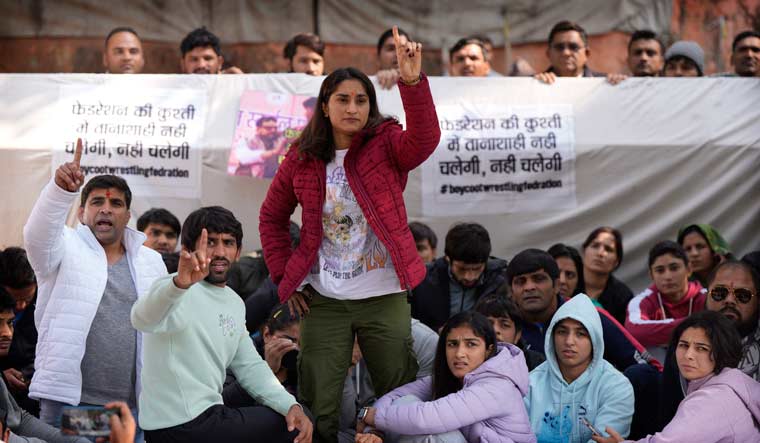 A day after the Union Sports Ministry directed the Wrestling Federation Of India (WFI) to suspend all ongoing activities with immediate effect, the federation has cancelled the emergency executive council meeting scheduled to be held at Ayodhya on Sunday morning.

The meeting was expected to take a call on WFI chief Brij Bhushan Sharan Singh's resignation, amid a series of allegations raised by country's top wrestlers against the federation and its president. However, the relevance and validity of the meeting was under shadow following the Union Ministry's suspension of all activities.

This comes as Union Sports Minister Anurag Thakur said Singh has been asked to step aside and will be probed by an oversight committee. The ministry on Saturday suspended Vinod Tomar, assistant secretary of the Wrestling Federation of India (WFI).

However, it is not yet clear whether Brij Bhushan will tender his resignation on Sunday.

Meanwhile, the Sports Ministry is expected to announce the names of its oversight committee members, who will probe the allegations of sexual harassment and corruption against Singh, on Sunday.

This was confirmed after a meeting held on Saturday between Sports Minister Anurag Thakur, Sports Secretary Sujata Chaturvedi and SAI DG Sandip Pradhan on the matter. "Sports Ministry will announce the names of the three-member oversee/probe panel on Sunday," a source told PTI. The committee will also oversee the day-to-day affairs of the federation.

The WFI had denied all the charges in its response to the government's notice and asserted that "there is no scope for arbitrariness and mismanagement " in the federation.

The IOA committee also has two advocates -- Talish Ray and Shlok Chandra -- besides former shuttler and IOA joint secretary Alaknanda Ashok, who is its vice chairperson.