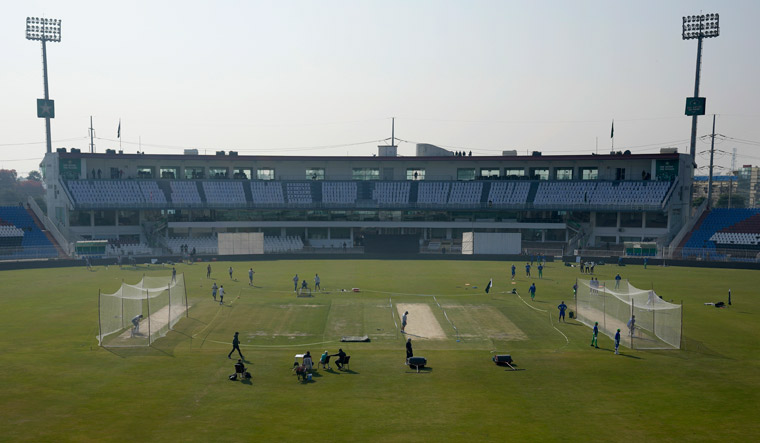 The first cricket test between Pakistan and England will start as scheduled on Thursday despite several England players having been ill on the eve of the match.

The Pakistan Cricket Board said in a statement Thursday two hours before the scheduled start that the England and Wales Cricket Board has informed the PCB that they are in a position to field an XI, and, as such, the first test will commence as per schedule today at the Rawalpindi Cricket Stadium.."

Several England players were affected by a virus ahead of the team's first test in Pakistan in 17 years, leading to discussions about postponing the start of the match by one day. Officials from both teams had agreed to delay a final decision on whether to postpone the game until 7:30 a.m. local time Thursday just two hours before the scheduled toss.

Only five England players Harry Brook, Zak Crawley, Keaton Jennings, Ollie Pope and Joe Root turned up for the training at the Pindi Cricket Stadium on Wednesday. The rest of the squad members, including captain Ben Stokes, stayed in the hotel as team officials said six or seven players had been affected by the virus.

Brook, Crawley, Pope and Root all were named in England's playing XI for the first test.

There's obviously a few guys not feeling 100%, Root told media, adding that he didn't feel good yesterday but woke up lot better on Wednesday before coming for the training at the stadium.

It's nothing like food poisoning or COVID I think it's just one of those things that we've unfortunately picked up as a group. We try to do absolutely everything right to make sure we're prepared really well for this game.

Sometimes you just pick up a virus and when you're all tied together in one, I tell you, you can spread it out. We did everything we can to try and mitigate that, but you have to see how things go tonight and tomorrow.

England team spokesman Danny Rueben said several staff members of the England contingent have also been affected by the virus.

England has already named its playing XI for the first of the three-test series with Liam Livingstone set to make his test debut and Ben Duckett is penciled as opener with Crawley. Veteran fast bowler James Anderson and Ollie Robinson are the two specialist fast bowler with Stokes as the other seaming option.