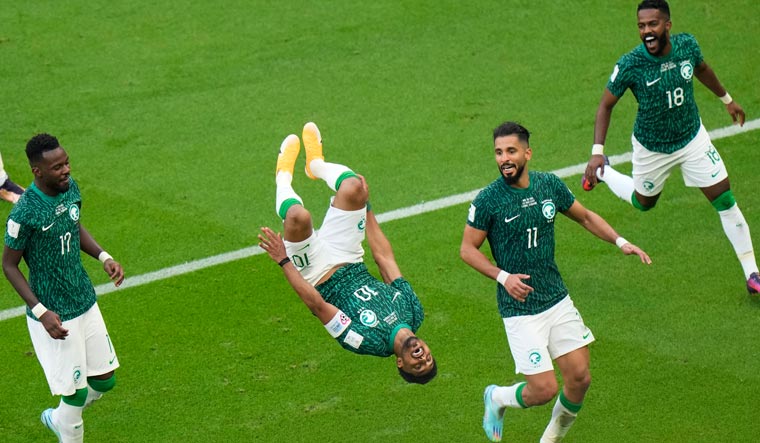 Saudi Arabia notched one of the biggest shocks in the history of FIFA World Cup after they outplayed Lionel Messi's star-studded Argentina 2-1 on Tuesday. The victory has prompted an outpouring of Arab pride with King Salman declaring a public holiday in Saudi Arabia on Wednesday.

The achievement is seen as a feather in the cap of Crown Prince Mohammed bin Salman. Prince Mohammed's brother Prince Saud posted pictures on Instagram showing the crown prince prostrating in thanks to God in a room after the match.

Amid these celebrations, social media is curious to know what gift the King is going to announce for the Green Falcons who humiliated the two-time champions  in front of a frenzied 88,012 crowd. Goals by Saleh Alshehri and Salem Aldawsari in a five-minute span early in the second half had given the Saudis a landmark result in the first World Cup staged in the Middle East.

Netizens' curiosity is not entirely unfounded. In 1994 World Cup, Saudi Arabia was one of the lowest-ranked teams as they travelled to the United States. However, they stormed into the second round after a few upsets.

The team received a spectacular welcome as they reached back with the King gifting a Rolls-Royce luxury car to striker Saeed Al-Owairan who scored the “magic goal” against Belgium. The goal is still considered one of the greatest in the World Cup history.

Tthe social media is already abuzz with rumours that Prince Mohammed is likely to announce similar luxury gifts for the current team members.

“What a match! MBS will now give each player of the KSA TEAM one Rolls Royce each in addition to a billion dollars EACH for winning against Argentina!,” tweeted Indian businessman and columnist Suhel Seth.

However, there has been no official announcement yet from the government.