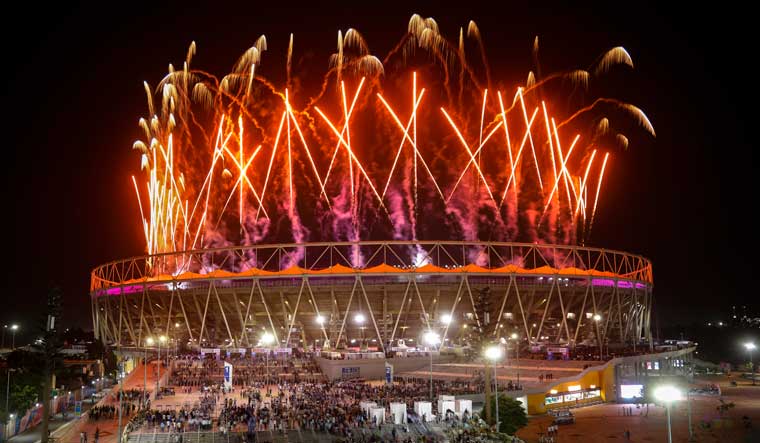 Fireworks over the Narendra Modi Stadium during inauguration of 36th National Games, in Ahmedabad | PTI

Pole vaulter Rosy Meena Paulraj of Tamil Nadu turned out to be the unlikely star of the athletics competition in the National Games as she shattered the national record enroute winning gold on Saturday.

Her two Tamil Nadu teammates, Pavitha Vengatesh and Baranica Elangovan were distance second and third with efforts of 4m and 3.90m respectively.

In men's long jump, Jeswin Aldrin of Tamil Nadu beat Commonwealth Games silver medallist Murali Sreeshankar of Kerala for the gold in a high-quality competition to qualify for the 2023 World Athletics Championships.

Sreeshankar, who won a silver in the Birmingham CWG in August and holds the national record of 8.36m, had a best jump of 7.93m, which he came up with in his first attempt. He had another jump of 7.55m before he passed on all his remaining four attempts due to hamstring injury.

"Sreeshankar has suffered a grade 2 hamstring injury. He will have to take rest for four to six weeks," his father S. Murali told PTI.

Another top long jumper, Muhammed Anees Yahiya of Kerala was third with a best jump of 7.92m.

Meanwhile, Amlan Borgohain of Assam and Jyothi Yarraji of Andhra Pradesh emerged as the fastest man and woman respectively of the National Games after clinching gold in the 100m dash events.

Jyothi, whose pet event is 100m hurdles in which she holds the national record, stunned the likes of Dutee Chand (Odisha) and Hima Das (Assam), to win the women's 100m gold with a time of 11.51 seconds.

National record holder Dutee finished sixth with a time of 11.69s while Hima was seventh in 11.74s.

Borgohain also took the opportunity to highlight the sacrifices his family had made to help him make a career in athletics.