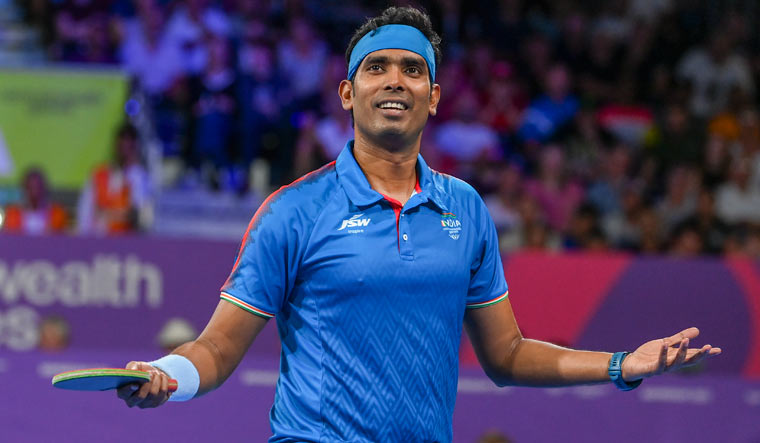 Superstar P.V. Sindhu and young gun Lakshya Sen lived up to expectations by grabbing gold medals as India swept the singles badminton competition at the Commonwealth Games for the first time, in Birmingham on Monday.

The world number seven from India outplayed her 13th ranked opponent 21-15 , 21-13 in front of a packed crowd at the NEC arena.

Sen trailed for majority of the first game but stayed close to the Malaysian who had accounted for world champion Yew Kean Loh and Kidambi Srikanth in his previous two matches.

Sharath Kamal showed age is just a number as the 40-year-old capped his best-ever performance at the Commonwealth Games by winning the men's singles gold.

Sharath, who had first won the singles gold back in 2006, had already claimed two golds here in the team and mixed doubles event alongside Sreeja Akula.

With this yellow metal, he increased his tally to a staggering 13 medals across five CWG appearances.

G. Sathiyan secured the bronze after a marathon battle against England's Paul Drinkhall.

On Sunday, Sathiyan paired up with the Sharath to claim the men's doubles silver after going down to the English duo of Drinkhall and Pitchford.

In one of its worst performances in recent times, the Indian men's hockey team suffered an embarrassing 0-7 drubbing at the hands of defending champions Australia to settle for a silver medal.

Australia blew away India with their whirlwind speed and relentless attacks, extending their dominance of the CWG stage.

Since hockey's introduction at the Games in 1998, Australia has always stood on top of the podium.

This is India's third defeat against Australia in a CWG final, having lost to them in the 2010 and the 2014 editions of the Games.

Nathan Ephraums and Tom Wickham scored a brace each while Blake Govers, Jacob Anderson, and Flynn Ogilvie also found the net in the lop-sided contest.

It was a far cry from what was expected in a gold medal clash as a dominant Australia pumped in five goals in the first half to take the game away from India.

The other time India suffered such a heavy defeat in CWG was in 2010 edition in New Delhi, where Australia hammered the hosts 8-0.

The Indians looked rusty and clueless as they conceded too much space to the Australians in the mid-field, which allowed the Kookaburras to make inroads.

Such was India's struggle that the team could not secure a single penalty corner.