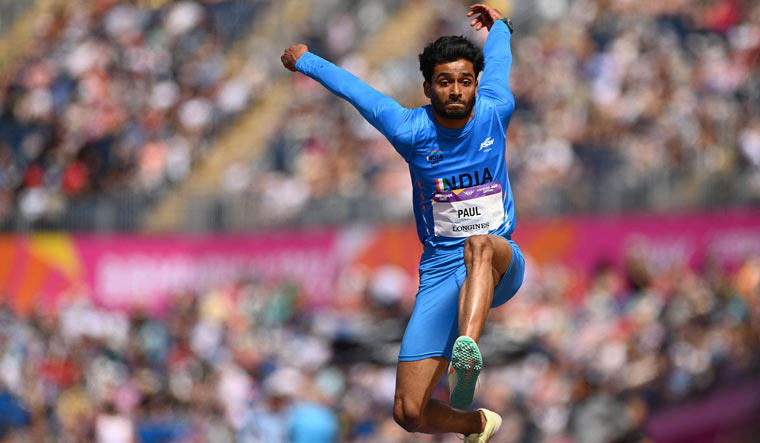 Brought up by his grandmother and labourer father after his mother's death when he was a small child, Eldhose Paul, who won a historic triple jump gold in the Birmingham Commonwealth Games, struggled for pocket money during his college days.

Hailing from Kolencherry, a rural area 26km away from Ernakulam city, Paul struggled financially and he took up to athletics to get a job so that he can be able to support his family.

"His family was very poor, his mother had died when he was around 5 or 6 years of age and his grandmother (now in 80s) brought him up. His father is a labourer, so he faced financial issues," Paul's childhood coach T.P. Ouseph told PTI from Kerala.

After passing his 12th standard examination, Paul, now 25, wanted to get admission at the sports hostel of Mar Athanasius College (MAC) at Kothamangalam.

The college is known for grooming athletes in Kerala but he was initially rejected by Ouseph, the chief coach, because of Paul's short stature.

"Paul was brought by an acquaintance of mine for admission at the sports hostel at MAC. It was around 2013. I was the chief coach but I said this boy is very short and he is not suitable for triple jump," Ouseph said.

"For a triple jumper his height was less. Even now, he is around 5 feet 8 inches tall. But after a trial, I found out that he (Paul) has very good speed, elastic body and explosiveness, so I thought I will give him a try."

Ouseph said Paul was not impressive in the first year but picked up in a couple of years later.

"When he was brought to me, he could jump around 13m, the next year he improved to 14m and by the third year he was jumping near 16m. Then I knew that this boy would one day win medals for India."

Ouseph said Paul faced financial hardships and so he (Ouseph) helped him out on many occasions.

"One or two days in a week, he will leave hostel for home and I asked him why. He would say he worked at the saw mill his grandmother owned for his pocket money.

"He is very humble, good mannered and focus on his goal. That separates him from my other trainees.

Paul, who was pursuing an Arts degree, left the college without completing his course as he was selected by Indian Navy in 2016.

"I told him to go for the job, because it was very important for him financially. When he left him in 2016, he was jumping around 15.75m. He later improved it while at Indian Navy to above 16m and today he crossed 17m for the first time.

"I am so happy to hear the news about his gold medal. Someone from his family called me up today to give the news. I am so happy that an athlete I had groomed has done the country proud."