How Judoka Tulika reduced 30kg on her way to CWG silver 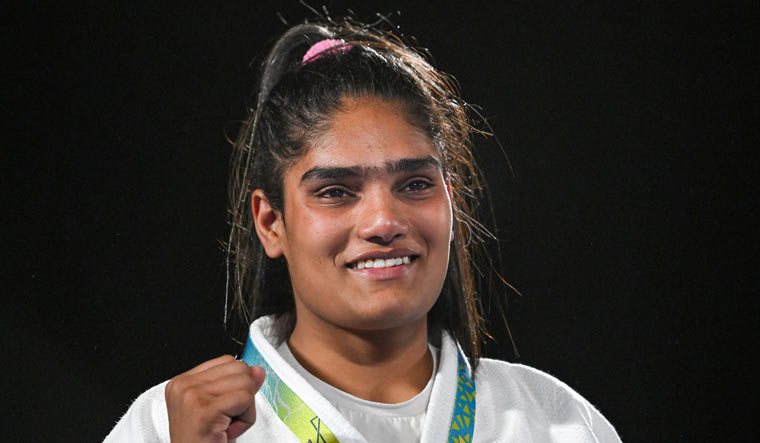 Overweight with bare minimum mobility only a year back, judoka Tulika Maan's journey from shedding flab to winning silver medal at the Commonwealth Games is nothing short of sensational.

With the long list for the Games was decided a year ago, Tulika was not even considered for selection as she could "hardly move".

"When the probables were decided a year ago, she was not among the players picked. She brought her weight down to 85kg from 115kg to get into shape. She weighs about 89-90kg at the moment,'' said coach Jiwan Sharma, who is here with the Indian judo contingent, in a chat with PTI.

"There is still work to be done as judo at the Asian level is much tougher compared to CWG," the coach added.

The competition here is not as stiff as the Asian Games, which is her next target, but the almost six feet tall athlete did have to work exceptionally hard to fit into the 78+ category.

Tulika otherwise trains with coach Yashpal Solanki at the SAI centre in Bhopal and after the medal ceremony on Wednesday, dedicated her silver to coach and mother, who is a cop in Delhi. Her father Satbir Maan was murdered when she was two.

"I did not come here for silver. Who knows what happens the next time I am competing in CWG. I have to change the colour of the medal. I can't be satisfied with this performance

"I committed two fouls for not attacking and tried to cover it and it did not work out," said Tulika who was inconsolable after the loss.

She led for majority of the fight before Scotland's Sarah Adlington pushed the Indian to the floor on her back to complete a successful ippon move.

The Indian judokas had gone to Spain for training ahead of the CWG and had they got more exposure trips, the outcome could have been different, feels Tulika.

She recalled the troubles she had to endure before she made it to the Indian team.

"There were lots of problems in me getting here but then SAI intervened. If I had got more training camps the result would have been better," she said.

Tulika took up judo way back in 2006 before taking a break in 2011. Solanki took her under his wings and made her shift to Bhopal.

"I took a break in 2011 and made a comeback and went to Yashpal sir. He tuned my game. I was unfit that time, I am still not fit enough. I was just thinking about the gold. The thought of not winning that made me cry after the bout."

Tulika owes everything to her mother, a cop with Delhi Police.

"My mom is always there with me. We are a small family of three that includes my mom and my younger sister. They both encourage me all the time and are a big reason why I am here today," she added.