Olympic bronze medallist Lovlina Borgohain, however, lost in the quarterfinal 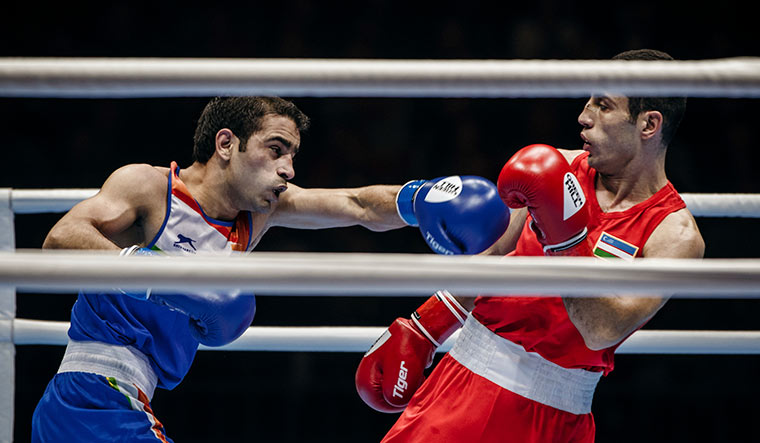 Amit Panghal ensured a fourth medal for India from the boxing ring after winning his flyweight (48-51 kg) quarterfinal against Scotland's Lennon Mulligan at the Commonwealth Games on Thursday.

It was a unanimous verdict in favour of the Indian southpaw. Panghal had won a silver medal during the last edition in Gold Coast.

The bout wasn't of great quality but the 26-year-old India prevailed over his much younger Scottish opponent, tiring him out with a solid defence. He gained points with occasional ferocious counter-attack.

In the first two rounds, Panghal employed a guard down approach to invite Mulligan to go on the offensive but swayed away from his reach with some nimble footwork.

In between he did land a couple of left jabs to rattle the 20-year-old Scot and in the final round unleashed a barrage of 'one-two' combination (a left-jab followed by a right cross).

Mulligan in fact got a standing count and by the end of round two, the writing was clear on the wall that Panghal will earn a second CWG medal.

Nikhat Zareen (50kg), Nitu Ganghas (48kg) and Mohammed Hussamudin (57kg) have also reached the semifinal stage to be assured of medals in their respective categories.

Olympic bronze medallist Lovlina Borgohain, however, was out-punched by last edition's silver medallist Rosie Eccles of Wales. Leading by a slight margin in the opening two rounds, the 24-year-old Borgohain went down via 2-3 split decision in the light middle weight quarterfinal.

Taking the court first, the last edition's silver medallist Sindhu did not need her 'A' game since the Maldives shuttler was no match to her class.

Fathimath produced some resistance in the second game but Sindhu pulled away from 9-9.

Srikanth was crestfallen after losing his singles match against lower-ranked Tze Yong Ng of Malaysia in the mixed team final but the world number 13 seemed to have taken it in his stride as he comfortably beat his rival.

He used his cross-court angled drop shots to good effect to pocket points.

Most of the points which the Ugandan shuttler managed were from unforced errors of Srikanth.

Hima wins her heat to qualify for 200m semis

Star Indian sprinter Hima Das qualified for the women's 200m semifinals after winning her heat with a timing of 23.42s.

The 22-year-old Hima led the five-woman field from the start with Rhoda Njobvu of Zambia clocking 23.85s to finish second while Jacent Nyamhunge of Uganda finished third with a timing of 24.07.

There are six heats lined up in the women's 200m and the top-16 will qualify for the semifinal.

Hima won heat 2 but Favour Ofili of Nigeria (22.71s in Heat 1) and the formidable Elaine-Thompson-Herah (22.80s in heat 5) had superior timings.

Meanwhile, in the women's hammer throw event, India's Manju Bala advanced to the final while compatriot Sarita Singh failed to make the cut.

The 33-year-old Bala finished 11th in the qualification round with a best throw of 59.68m in her first attempt.

In the same event, the other Indian athlete Sarita failed to make the final after she finished 13th with her best throw of 57.48.

According to the rules, best 12 performers advance to the final, which will be held on Saturday, August 6.

Canada's Camryn Rogers topped the qualification round with best throw of 74.68m, which is a Commonwealth Games record.