England were all over India, reducing the visitors to 98 for five 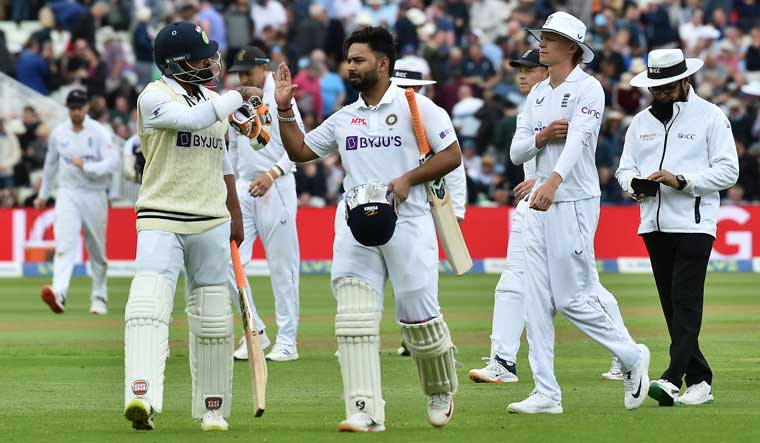 Rishabh Pant and Ravindra Jadeja's counter-attacking partnership helped India recover to 174 for five at tea on day one of the rescheduled fifth Test against England at Edgbaston on Friday.

Rain delayed the start of the second session by an hour and England were all over India soon after play resumed, reducing the visitors to 98 for five.

While James Anderson did the damaged in the morning, Matthew Potts got the prized wicket of an out of form Virat Kohli (11) and a shaky Hanuma Vihari (20) post lunch to put England on top.

Vihari was the first to go after Potts trapped him in front of the stumps with a full ball that darted back sharply. In his following over, Potts sent back Kohli, who dragged one on to his stumps in his half-hearted attempt to leave the ball.

The former India skipper had looked quite assured in the middle until he was caught in two minds while leaving the ball.

Shreyas Iyer (15 off 11), playing his first Test outside India, started on an aggressive note by collecting three fours off Potts. However, Anderson and the support staff had done their homework on Iyer, who has had issues against the short ball.

The 39-year-old pacer angled one around the rib cage area that induced a faint edge on way to Sam Billings, who took a brilliant one handed catch diving full-stretched to his left.

India looked down and out at that stage and fresh lease of life was infused in the innings by the two southpaws, Pant and Jadeja.

Pant has made a reputation of taking the attack to the opposition even when chips are down and he just did that in the company of the more experienced Jadeja.

Pant made his intent loud and clear by advancing and smashing Anderson down the ground. Jadeja too played his strokes with the highlight being the straight drive and cover drive off Broad.

Put under pressure, Stokes went for the gamble by giving the ball to left-arm spinner Jack Leach.

Pant was more than happy to take the bait and hammered left-arm spinner Jack Leach for two fours and a straight six to push India towards 150.

He got to his 10th half-century with a four off Leach towards deep square leg.

Earlier, England's most decorated pacer Anderson produced probing spells in the rain-hit morning session to reduce India to 53 for two.

Anderson had openers Shubman Gill (17 off 24) and Cheteshwar Pujara (13 off 46) caught by Zak Crawley at second slip to give England the advantage after Stokes opted to 'chase' at Edgbaston.

India could have been three down had Crawley held on to a tough chance presented by Vihari off Matthew Potts.

In overcast conditions, it was expected to be a tough session for India, who came into the final match of the series after playing a four-day warm-up game. England, on the other hard, came battle hardened following a morale boosting whitewash of reigning world Test champions New Zealand.

Gill promised a lot during his stay in the middle. He began with a boundary with a flick through mid-wicket off Anderson before producing a glorious straight drive. Then came the pull shot off Broad and it seemed Gill was ready for the challenge.

However, one is never set while playing in England and a poor shot led to Gill's downfall. Anderson is relentless around the off-stump but this particular ball was on the wider side and Gill could have left it alone but he poked at it to be caught at second slip.

After a five-over burst, Anderson returned to dismiss Pujara for the 12th time in his career. Pujara, who got back into the Indian team after a prolific run in county cricket, got a beauty on the off-stump that straightened and bounced off good length to take the outside edge.

Pujara had looked solid until he was undone by Anderson's brilliance.