For the third consecutive year, UEFA was forced to change the location of the final 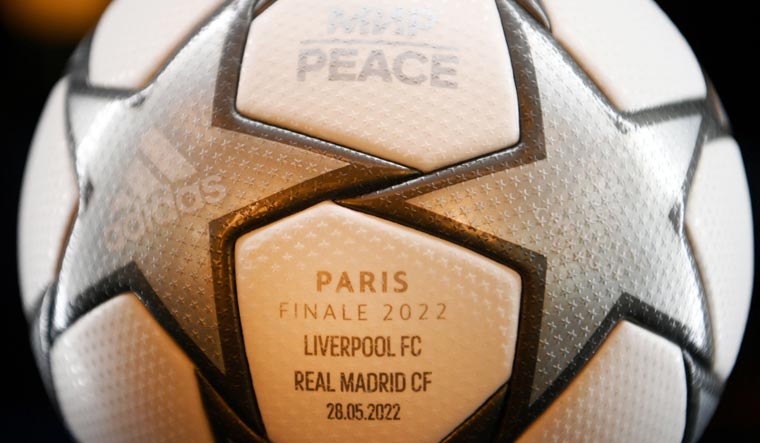 The official ball for the UEFA Champions League, on the eve of the final between Real Madrid and Liverpool | AFP

Thousands of football fans were descending on Paris to see Liverpool and Real Madrid meet in the Champions League final later on Saturday.

There are milestones at stake in the Stade de France.

Carlo Ancelotti is looking to become the first coach to win European club football's top prize four times, adding to his 2014 success during his first spell in charge of Madrid. The Italian's first two triumphs came with AC Milan in 2003 and 2007.

Ancelotti has already delivered the Spanish title in his first season back at Madrid, which beat Liverpool in the 2018 final led by Zinedine Zidane for a record-extending 13th European Cup.

"We are very close to achieving something huge this season, and we will give our all to achieve it," Ancelotti said.

"We are very calm in the camp. This team is very good at handling the pressure of this matches."

Liverpool went on to become European champions for a sixth time by returning to the final in 2019. Since then Jurgen Klopp has ended the team's 30-year English championship drought in 2020. While the Premier League was missed out on by a single point last weekend, the season can end with a rare treble of trophies, having already won the FA Cup and the League Cup.

It was facing elimination in the round of 16 before two of Karim Benzema's 15 European goals this season turned around the game against Paris Saint-Germain. It took an equaliser with 10 minutes to go against Chelsea to stay in the quarterfinals before ousting the defending champions in extra time. Madrid entered the 90th minute against Manchester City heading out in the semifinals until Rodrygo was the saviour again with two goals, capping another incredible comeback.

"Then that's my only concern at the moment. If we do that, that we be ourselves that be really confident as well. But of course the confidence level of the Madrid players is incredibly high and it's important part in football to be confident and sure about yourself and these kind of things."

For the third consecutive year, UEFA was forced to change the location of the final. Not this time due to the pandemic but Russia's invasion of Ukraine which saw St. Petersburg stripped of hosting rights.

With the war entering a fourth month, the word "peace" will feature on the final match ball, which will be auctioned later to raise money for refugees.

"Let's see it like this, that the game still happens and is not in St Petersburg maybe is exactly the right message which Russia should get. Life goes on, even when you try to destroy it. We play this final for all the people, not only but as well, for all the people in Ukraine."