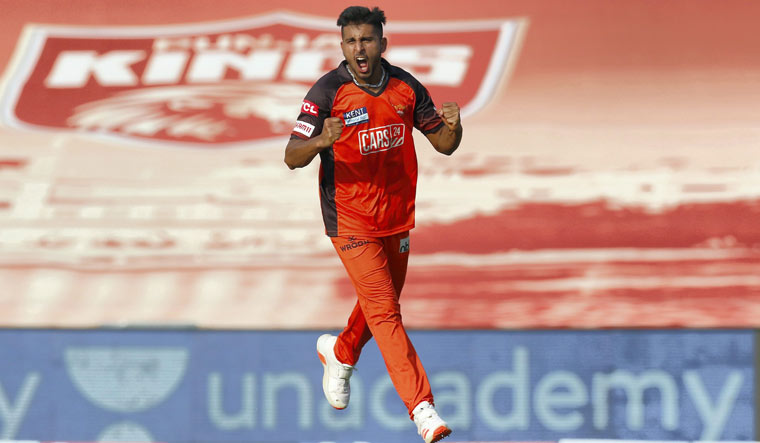 Young pace sensation Umran Malik's scorching final over proved to be the difference as Sunrisers Hyderabad slayed Punjab Kings by seven wickets for their fourth successive win in the Indian Premier League here on Sunday.

In top gear with Liam Livingstone's counter-attacking 60 off 30 balls (5x4, 4x6), PBKS lost five wickets in seven balls with Malik (4/28) producing a perfect final over -- a rare four-wicket maiden -- to skittle out the opposition for a below-par 151.

After Bhuvneshwar Kumar (3/22) provided the key breakthrough of Livingstone, the 22-year-old uncapped pacer picked three wickets while the fourth came via run out to derail PBKS.

In reply, Sunrisers Hyderabad did not have a perfect start and lost skipper Kane Williamson (3) early in the fourth over with Kagiso Rabada drawing the first blood.

Playing without their regular skipper Mayank Agarwal, who suffered a toe-injury during training, PBKS were also let down with their sloppy fielding as they missed a runout and conceded easy runs defending a small total.

Markram finished off the chase in the penultimate over hitting Vaibhav Arora for consecutive boundaries and six to seal the issue with seven balls to spare.

The win took SRH to eight points, moving up from the middle-table rush to climb to fourth spot, while PBKS remained on seventh with six points from as many matches.

Earlier Livingstone, who was the most expensive overseas player in this season's IPL auction with a price tag of Rs 11.50-crore, resurrected the PBKS innings with a counter-attacking 60 off 30 balls (5x4, 4x6) -- his third fifty in four matches.

Reduced to 61/4 inside eight overs after being put in, Livingstone found a perfect ally in No 6 batter Shahrukh Khan (26 off 28 balls; 1x4, 2x6) as the duo stitched together 71 from 49 balls to revive them in the middle overs.

On a slow pitch where scoring was difficult early on, Livingstone did not have any trouble as he had shots all over the pitch.

But the momentum shifted heavily in favour of SRH after Bhuvneshwar (3/22) provided the key breakthrough of Livingstone as PBKS lost five wickets in seven balls with Malik (4/28) producing a perfect final over.

Malik first had Odean Smith with a slower one before castling Rahul Chahar and Vaibhav Arora in successive deliveries.

Punjab without their skipper and opener Mayank Agarwal had an anxious start and lost two wickets inside five overs including that of stand-in captain Shikhar Dhawan (8).

Punjab kept losing wickets and were soon reduced to 33/2 inside five overs when Livingstone came in to take charge of the proceedings.

There were more to follow as Jonny Bairstow (12) and Jitesh Sharma (11) departed in successive overs but Livingstone and Shahrukh held on to turn it around in the middle overs.