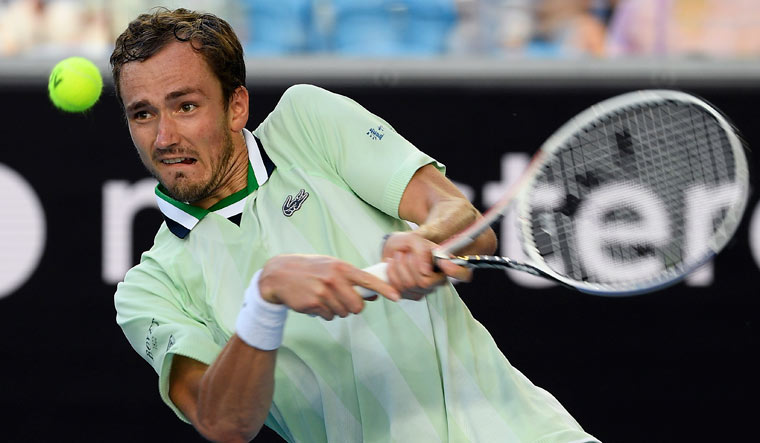 As Daniil Medvedev sat courtside trying to re-hydrate during a changeover, an image of nine-time Australian Open champion Novak Djokovic flashed up in the stadium behind him.

It was in the third set Saturday, and it was like the absent No. 1 was looking over the shoulder of the player who is effectively the No. 1 seed at the year's first Grand Slam tournament.

Medvedev, who lost last year's Australian Open final to Djokovic but avenged that with a victory over the Serb for the US Open title, reached the fourth round for the fourth straight year at Melbourne Park with a 6-4, 6-4, 6-2 win over Botic van de Zandschulp.

The 25-year-old Russian was a conspicuous fan favourite on Margaret Court Arena, too, two days after being unsettled by the boos and jeers of a parochial crowd on Rod Laver Arena when he ended the run of mercurial Aussie Nick Kyrgios.

Medvedev later clarified he didn't have a problem with the Australian crowds and had been fully expecting to have them against him when he played Kyrgios, just not while he was in his service motion.

Medvedev avoided a showdown with Djokovic after the world's top-ranked player had his visa cancelled and was deported on the eve of the tournament for failing to meet Australia's strict Covid-19 vaccination criteria.

He also avoided another match against an Australian in the fourth round when wildcard entry Chris O'Connell lost to Maxime Cressy 6-2, 6-7 (6), 6-3, 6-2.

Cressy's win means there's two 24-year-old Americans who will be in the fourth round of a major for their first time.

On the women's side, two-time Grand Slam champion Simona Halep is into Week 2 at Melbourne Park for the fifth consecutive year after a 6-2, 6-1 victory over Danka Kovinic.

She will be joined by second-seeded Aryna Sabalenka, who advanced with a 4-6, 6-3, 6-1 win over No. 31 Marketa Vondrousova. Her next match is against No. 115-ranked Kaia Kanepi, who has reached the quarterfinals six times at Grand Slam events, but only once since 2013 and never in Australia.

None of the other players remaining the women's draw has won as many tour-level titles as Halep's 23.

Cornet followed up her upset of No. 3 Garbie Muguruza by reaching the fourth round at the Australian Open for the first time since 2009.