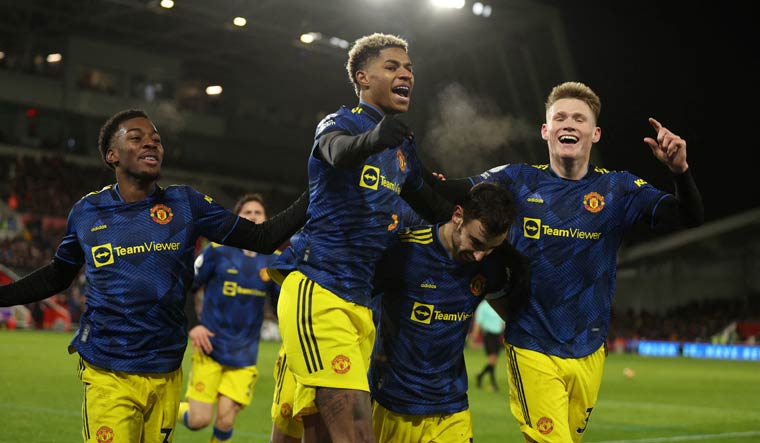 Manchester United staged a second-half turnaround as goals from Anthony Elanga, Mason Greenwood and Marcus Rashford earned a 3-1 win at Brentford to boost the team's top-four ambitions in the Premier League.

It was another less-than-convincing display from United on Wednesday, though, with Cristiano Ronaldo ostensibly far from impressed at being substituted with 20 minutes left.

Elanga, a 19-year-old winger starting only his fourth Premier League match, broke the deadlock in the 55th minute by latching onto Fred's pass behind Brentford's defence and then nodding the ball into the corner. Brentford, by then, had wasted a host of chances to take the lead in the first half.

Greenwood then notched his first Premier League goal since October, tapping in from Bruno Fernandes' pass, to make it 2-0 in the 62nd. Rashford climbed off the bench to add the third—again off a pass from Fernandes—in the 77th for a first league win of 2022.

"First half was not good in all aspects of the game," United manager Ralf Rangnick said.

"In the second half, we were more urgent, attacking higher up the pitch and taking the right decisions in the counterattack and we scored, which is the big difference."

It was incredibly hard on Brentford, which had dominated the first league meeting between these sides since 1946 but only had Ivan Toney's late scrambled consolation to show for it.

"We are the smallest club in the Premier League, Manchester United the biggest. We destroyed them in the first half.

"They didn't have a sniff, three huge chances and there could only have been one winner of this game. They are unbelievably lucky."

United stayed in seventh place, but is only two points behind fourth-place West Ham in the race for Champions League qualification.

Ronaldo, who had missed United's last two games because of a hip injury, walked off the field slowly after the board flashed up to show he was being replaced by Rashford in the 70th minute. He muttered to himself and was seen throwing his arms up in apparent disgust.

Rangnick played it down.

"That is normal  a striker wants to score," Rangnick said.

"But he has come back from a little injury and it was important to remember we have got another game coming up."