First ODI preview: All eyes on Kohli the batter and Rahul the skipper 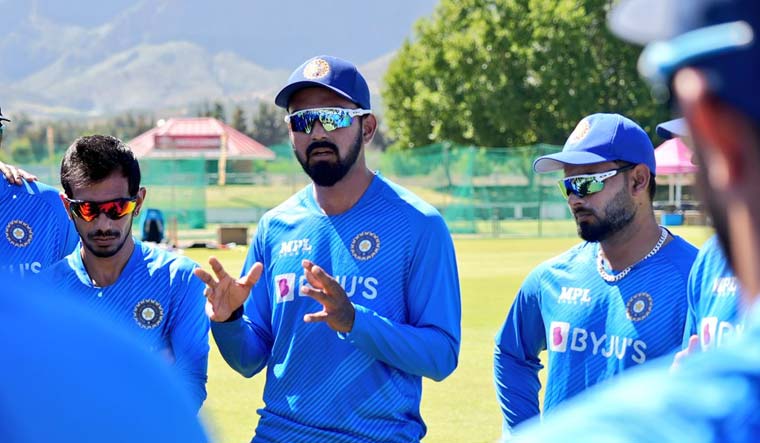 K.L. Rahul speaks to the Indian team players ahead of the first ODI against South Africa | BCCI Twitter

The mighty Virat Kohli's presence in the Indian playing eleven as a mere player for the first time in seven years will be keenly followed while his potential successor in red-ball cricket, K.L. Rahul, will be judged for his captaincy in the three-match ODI series against South Africa beginning on Wednesday.

Whether he is batting in the middle or fielding at the boundary line, Kohli's every move is tracked but some of that attention will now have to be shared by Rahul.

More importantly, will he be at his usual animated best on the field or will the cricketing world see a rather subdued Kohli after his stunning resignation from Test captaincy brought an end to his innings as official leader of the team across formats?

He did not want to leave ODI captaincy after relinquishing the role in the shortest format and it led to a war of words with the BCCI on how the entire matter was handled.

His supporters and Indian cricket, in general, will be hoping that Kohli has put his differences with the BCCI firmly behind him and come Wednesday, he starts a new innings with his willow doing most of the talking. A highly desired century after two years would be cherry on top.

We are here at Boland Park to begin prep for the ODIs 👍🏻#TeamIndia | #SAvIND pic.twitter.com/psMVDaNwbc

Rahul, who is leading the side in the absence of an injured Rohit Sharma, is expected to turn to Kohli for advice during the series. Not only Kohli has a major role to play as a batter, but as vice-captain Jasprit Bumrah said on the eve of the series, the star "will always be a leader" in the team.

With the new leadership and support staff, India will look to win the series with one eye on preparations for the 2023 World Cup and also make up for the disappointment of unexpectedly going down in the Tests last week.

The last time a full-strength India played an ODI series was at home against England in March before a second-string squad travelled to Sri Lanka in July.

Rahul batted in the middle-order against England but it remains to be seen if he moves back to the top alongside Shikhar Dhawan.

Ruturaj Gaikwad, who made the squad following an exceptional domestic season, might have to wait longer for his ODI debut.

It will be crucial three games for the seasoned Dhawan, who has already lost his place in the T20 side.

The southpaw has thrived under pressure in the past and will be looking to solidify his position as the first-choice opener alongside Rohit when the latter returns from injury.

Kohli will bat at his usual number three spot while there will be a toss-up between Suryakumar Yadav and Shreyas Iyer for the number four position.

Rishabh Pant is expected to come at number five while Venkatesh Iyer is likely to make his 50-over debut as the all-rounder at six, having shown promise in the T20s against New Zealand.

The two spinners likely to play are Yuzvendra Chahal and R. Ashwin, who has made a comeback after more than four years.

Bumrah and Bhuvneshwar Kumar will share the load in the pace department while for the third pace option, the management could pick Deepak Chahar, Shardul Thakur or Prasidh Krishna.

Mohammad Siraj, who injured his hamstring during the Test series, is also fit as suggested by Bumrah on Monday.

On the previous tour, India hammered the hosts 5-1 in ODIs and they will draw confidence from that.

South Africa will be in high spirits after a memorable victory in the five-day format.

Skipper Temba Bavuma played a few crucial in the preceding Tests and he will carry that confidence into his batting as well as his leadership.

Quinton de Kock, who retired from Test cricket after the series opener against India, starts his life as a white-ball-only player.

Tall left-arm pacer Marco Jansen, who excelled in his maiden Test series, is expected to trouble the Indian batters with his extra bounce and variations in the short format after earning a maiden call-up.

If Tests were any indication, the ODIs would be an intensely-fought affair.

The match starts at 2pm IST on January 19.