This is Sen's biggest title yet 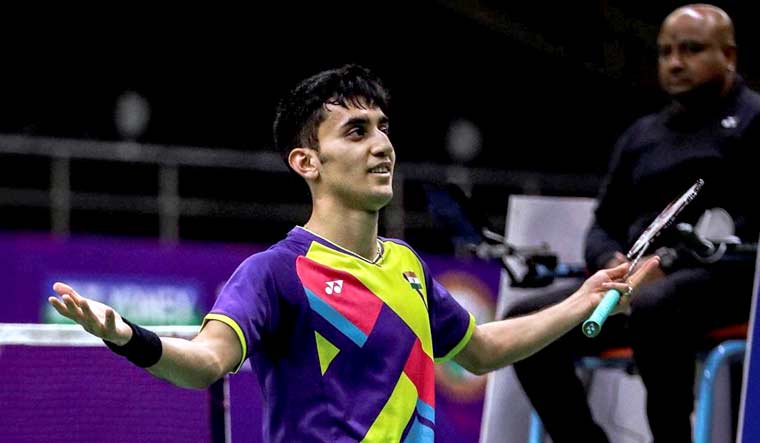 It was after Satwiksairaj Rankireddy and Chirag Shetty became the first team from the country to win India's flagship tournament after toppling three-time world champions Mohammad Ahsan and Hendra Setiawan.

The 20-year-old Sen, who had claimed his maiden world championships medal with a bronze in Spain last month, produced a fine performance to outshine the fifth-seeded shuttler 24-22 21-17 in the summit clash that lasted 54 minutes.

Satwik and Chirag showed nerves of steel as the duo saved five game points to overcome the world No. 2 Indonesian pair 21-16 26-24 in 43 minutes.

Going into this match, the two had a 2-2 head-to-head record with Sen losing two of the last three meetings, but the Indian was the better man on show on Sunday as he showed great athleticism, used his attacking shots to good effect and came up with his punched winners from the back at the right moments.

It is Sen's biggest title of his career. He had won two Super 100 titles -- Dutch Open and SaarLorLux Open -- besides three international challenge at Belgium, Scotland and Bangladesh in 2019, before the COVID-19 pandemic came in the way of his progress.

Last year, the youngster made it to the semifinals at Hylo, reached the knockout stage at World Tour Finals on debut before sizzling at the World Championships with a bronze.

Satwik and Chirag came into the match with a 1-3 head-to-head record against their opponents but they dished out a brave effort to stave off a fightback from the Indonesians and reign supreme in the final.

From almost missing the tournament following false COVID positive results to winning the title, it turned out to be an incredible start to 2022 for the Indian pair, which accumulated valuable ranking points ahead of a busy season, which comprises big-ticket events such as the Commonwealth Games and the Asian Games.

The Indian pair started on a positive note and even though the Indonesian combination fought back, Satwik and Chirag ensured they were two points ahead at the first interval.

The Indians tried to engage their rivals in rallies and led 18-13 but the Indonesians reduced the deficit to 16-18 before Satwik and Chirag prevailed in the opening game.

But the Indian pair again ensured they have the advantage at the break, grabbing a slender 11-10 lead. Sawtik and Chirag maintained the intensity in the rallies after the break to lead 15-13.

The world number two again drew parity at 17-17 but Satwik and Chirag moved to 19-17 when Ahsan erred at net. Chirag went long next and it was 19-19. The Indonesians managed to move to a game point with a tap by Ahsan.

What followed was a frequent exchange of points as both India and Indonesia earned and squandered their advantageous positions in equal measure.

After a fierce battle, it was the Indian pair that emerged winners with the Indonesia squandering five game points.

Satwik and Chirag had won the Thailand Open Super 500 title in 2019, besides reaching the final at French Open Super 750 the same year.

The duo also claimed the silver medal at the Gold Coast Commonwealth Games, besides winning the Hyderabad Open Super 100 and finishing runners-up at Syed Modi International in 2018.

Satwik and Chirag played a crucial role in India earning the historic mixed team gold medal in the 2018 Commonwealth Games.

The Indian pair also had qualified for the Tokyo Olympics last year but couldn't cross the group stage despite winning two out of their three matches. PTI ATK AH AH 01161902