Labuschagne was dropped twice but remained unbeaten on 95 at stumps 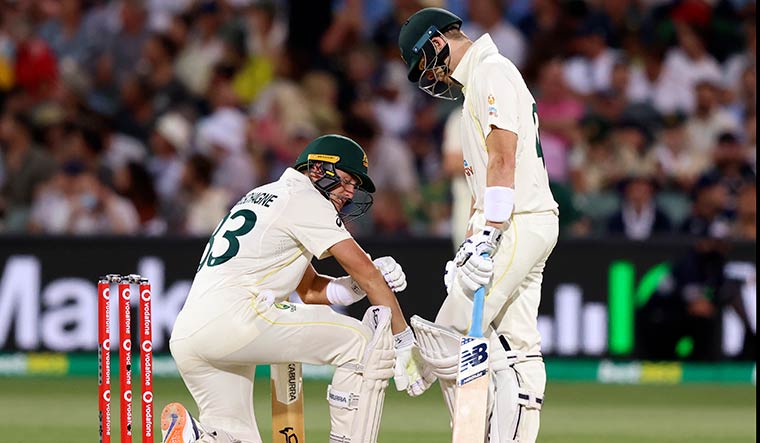 Australia's Steve Smith, right, checks on teammate Marnus Labuschagne after he was struck by a delivery | AP

Australia shrugged off the late withdrawal of new skipper Pat Cummins because of coronavirus concerns to dominate England on the opening day of the second Ashes test and reach 221-2 at stumps.

Marnus Labuschagne was dropped twice but remained unbeaten on 95 at stumps Thursday after sharing partnerships of 172 with David Warner (95) and 45 with Steve Smith.

Smith returned to the Australian captaincy for the first time since the 2018 sandpaper scandal after Cummins was ruled out. He was deemed to be a close contact of a positive COVID-19 case when he dined at a restaurant on the eve of the match.

Smith won the toss and just about everything else went Australia's way to start the day-night test.

He was unbeaten on 18 after waiting most of the day to bat, with Australia losing just two wickets despite an England attack bolstered by the return of Jimmy Anderson and Stuart Broad.

Wicketkeeper Jos Buttler took a brilliant catch in the first hour to dismiss opener Marcus Harris (3) but then dropped Labuschagne twice once down legside when he was on 21 and the other when he fumbled a regulation chance off Anderson's bowling with the second new ball when the Australian No. 3 was on 95.

That was massive for the team there. Just getting through that period, me and Steve there. Just sets us up for tomorrow, said Labuschagne, who batted for almost six hours and faced 275 deliveries.

My job is to make sure I capitalize on that.

Veteran pacemen Anderson and Broad were recalled after missing the series opener and had the batters in trouble early, Australia surviving three reviews in the first hour and Warner taking 20 deliveries to get off the mark.

Warner and Labuschagne continued into the night session and posted their sixth century partnership, and their second in as many tests after their 156 at the Gabba last week.

But after doing all the hard work early, Warner hit a short, wide ball from Ben Stokes directly to Broad in the covers and his 167-ball innings ended on 95 one better than his innings in Australia's nine-wicket win in the first test last week.

It was a reward for Stokes, who should have had a wicket in the 35th over when Labuschagne gloved a chance down the leg side but Buttler couldn't complete the catch.

Most of the drama Thursday happened pre-match.

Cricket Australia revealed only three hours before the coin toss that Cummins was ruled out because he was exposed to a person with COVID-19 in an Adelaide restaurant on Wednesday night.

He was deemed a close contact by the state's health authorities and ordered to isolate for seven days. Cummins has already returned a negative test for COVID-19.

Gutted to miss this test but really excited to see Neser finally get his chance in the baggy green, Cummins said in a Twitter post.

He has done the hard yards and is a seriously skillful player.

Smith became the third Australia captain in three tests. Tim Paine, who replaced Smith as test captain after the sandpaper scandal in South Africa, quit last month after reports emerged he'd been investigated four years ago for sending an inappropriate text to a work colleague.

He was replaced by Cummins, with Smith as vice-captain for the series-opening win in Brisbane.

Now Smith is back.

It's a huge honor," Smith said after the toss.

It's been pretty interesting morning.

Cricket Australia chief executive Nick Hockley said Cummins hadn't breached any protocols by dining out and was unlucky to miss the game.

We don't want to completely lock down the players, Hockley said.

I think we struck a balance, we always know that there's a level of risk.

We've learnt over the last 18 months that can have other consequences in terms of mental health and well-being.