After six months as manager, Rangnick will move into a consultancy role 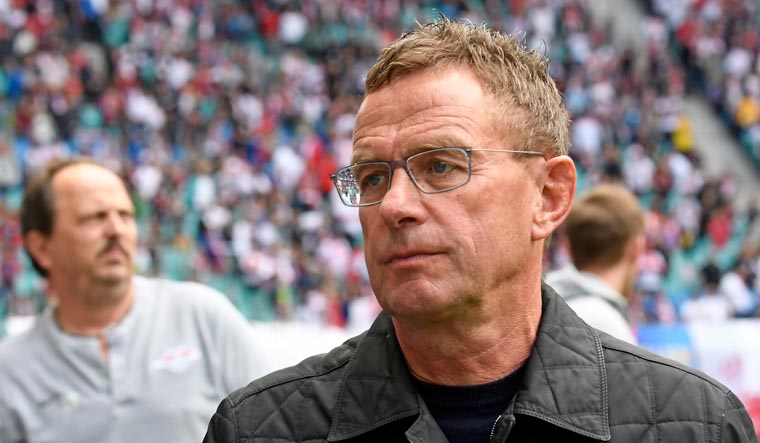 How did they pull this off? Manchester United fans cannot be blamed if that was their reaction to the club appointing Ralf Rangnick as its interim manager. The German is a great appointment. And United, believed to be the most supported club in the world, are also arguably among the worst run. Therefore, fans were not used to good decisions. Not many had been made since Sir Alex Ferguson retired in 2013.

But, somehow, the inept leadership team at the club has stumbled upon Rangnick. The best part of the appointment is that after six months as manager, he will move into a consultancy role. This is something the club needs badly. An experienced football man advising the mix of inexperienced football people and money men who are calling the shots at the legendary club. If they are willing to listen, Rangnick is more than capable of making them useful.

And, it seems like they are ready to learn. Football director John Murtough told the club website: “Ralf is one of the most respected coaches and innovators in European football. He was our number one candidate for interim manager, reflecting the invaluable leadership and technical skills he will bring from almost four decades of experience in management and coaching. Everyone at the club is looking forward to working with him.”

Rangnick is a builder of clubs. He has raised at least two German clubs (1899 Hoffenheim and RB Leipzig) from nothing to the top of the game in the country. In fact, at the Red Bull-owned football clubs, of which Leipzig are the crown jewel, his eight-year executive tenure, involved in development of all aspects of football operations, helped to take the market value of group clubs from around €100 million to over €1 billion.

At United, he is, of course, walking into one of the world's richest football clubs. So, in the short-term, his primary task would be to get the team playing with an identity again. And when someone is called "the godfather of gegenpressing" and is credited with influencing coaches like Jurgen Klopp (Liverpool), Thomas Tuchel (Chelsea) and Julian Nagelsmann (Bayern Munich), there can be no doubt what the style of football is going to be.

So, the big question is, can the current group of players cope with his style of high-intensity, attacking football? They are talented, no doubt. But, over the last three years, at least some of them have been spoilt by the favouritism of former manager and club legend Ole Gunnar Solskjaer. The players all deserve a clean slate. But it remains to be seen who will sink and who will swim.

One thing is certain though. Those who do not sink will become the best versions of the players they can be. And this is vital in rebuilding United as a football club. The players who are not good enough need to be moved on. Rangnick will have over six months to assess the players before he moves upstairs. He could well make some big decisions with regards to the squad. After all, it did not take Solskjaer long to get rid of Marouane Fellaini.

Rangnick is also expected to have a big say in who the next manager is going to be. This also works well for the club. He can drill his philosophy into the players. Get rid of those who cannot cope and then bring in a manager suitable for his style. Ajax manager Erik ten Hag seems to be an early frontrunner to take over next summer. It also helps that Rangnick is also likely to be key in player recruitment decisions.

One of the biggest problems exposed at United recently has been bad coaching. Assistant managers Michael Carrick and Mike Phelan seem likely to continue in their roles, as things stand. Phelan, who was also assistant to Ferguson, did not have the expected impact in his second spell as an assistant at the club. Former club captain Carrick, and first-team coach Kieran McKenna, who was built up as one of the best young coaches around, have both proven that they are not good enough.

If they are to continue under Rangnick, they will have to change their methods drastically to adapt to the German's style. Evidence suggests that they are unlikely to succeed. But it is also possible that Rangnick can make them better coaches. In either case, the club is likely to persist with the coaching set up at least till summer. And this makes sense as the next manager may want to bring in his own coaches.

It is futile to expect a drastic change by United's next game against Arsenal on Friday morning (1:45am IST). After all, it is not yet certain when Rangnick can take charge; his appointment is "subject to work visa requirements" and may yet drag on for a few more days. Not to mention the delay if he tests positive for COVID-19. After Arsenal, the next match is on Sunday (7:30pm IST), against Crystal Palace.

That is a brutally short turnaround time. So, the impact of Rangnick's appointment is likely to be consistently visible only from United match against Norwich City on December 11. However, the dead rubber match in the Champions League against Swiss team Young Boys has also become interesting now. As United are already through to the next round in that competition, Rangnick can try out some of the exciting young players in the squad.

There is no doubt that there is a lot to do for Rangnick at United. He will have to overhaul every aspect of the football operation at United, while shackled by the inefficient structure in place. But there is no doubt he is capable of doing it. He has done tougher jobs. Rangnick is definitely the saviour that United needs. Now, he needs support and the freedom to do his job. The start is good; United fans seem to be all for some disruption from "Wreck it Ralf".