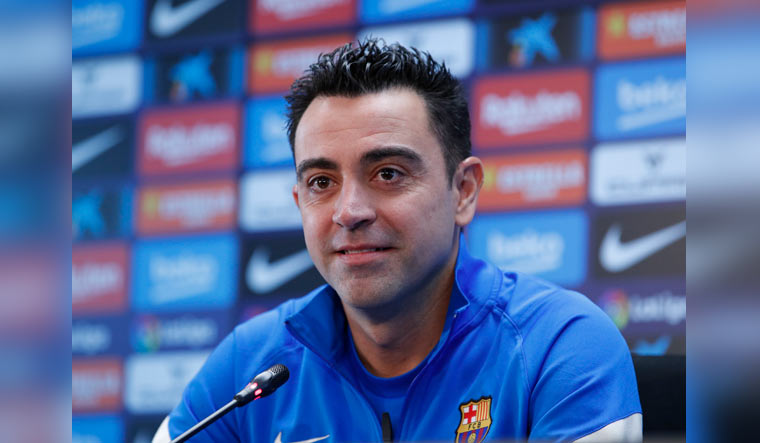 For midfielder-turned-coach Xavi Hernandez, the trick to getting Barcelona back on the winning path is not signing better players or the tactical tweaks he is sure to make.

The key for Xavi is the old-school values that he grew up with as a youth at the La Masia training academy.

"I am going to put my life into this job for this to work," Xavi said Friday, a day before his Barcelona coaching debut in a derby against Espanyol at Camp Nou.

"I am going to transmit to my players that we are Bara and that means we have to give more than just 100 per cent every minute, every second so that this can work. We owe a lot to so many people, and we can't let them down, at least not in our values of showing the right attitude, making an effort and accepting sacrifice.

"Later, the results will depend on our opponents and aspects of the game, but we have to make our fans proud of us, even when we fail to win."

The 41-year-old Xavi was hired before the international break two weeks ago to replace the fired Ronald Koeman.

Xavi has inherited a team that is struggling to adjust to life after Lionel Messi and is in ninth place in the Spanish league. Far from the juggernaut he helped create before leaving in 2015, Barcelona has been handed several humbling losses in recent seasons, both before and after Messi left.

As a player, the midfield maestro was the on-field tactician who helped teams coached by Frank Rijkaard, Pep Guardiola and Luis Enrique win the Champions League four times.

Now he said he is less nervous as a coach than as a player, since actually performing on the field is the hard part.

But Xavi said he needs every one of his players to be ready to contribute, especially given the spate of injuries and health problems that have sidelined forwards Ansu Fati, Ousmane Dembel, Sergio Aguero and Martin Braithwaite.

While Xavi praised the talent of his players, including 17-year-old midfielder Gavi Pez, he said he is also hoping Philippe Coutinho can get back to being the player he was in England before joining Barcelona.

Barcelona set a club record for spending on a transfer when it paid Liverpool 160 million euros ($192 million) for the Brazilian in January 2018. But Coutinho never lived up to expectations and spent the 2019-20 season on loan at Bayern Munich. He returned last season but injured a knee in December and was out of action until the beginning of this season.

Now, at the age of 29, local media have speculated that the club would like to sell him. Xavi, however, said he will give the Brazilian a chance.

"(Coutinho) has to recover his confidence," Xavi said.

"We have spoken with him, and he can be important for this club. It depends on him. It is a question of his mind and emotions, not of his talent. He will have his opportunities because he is a player that I like personally."

After Espanyol, Barcelona faces a critical Champions League game against Benfica on Tuesday.