New Zealand, Afghanistan, Pakistan and England to fight it out in the semis 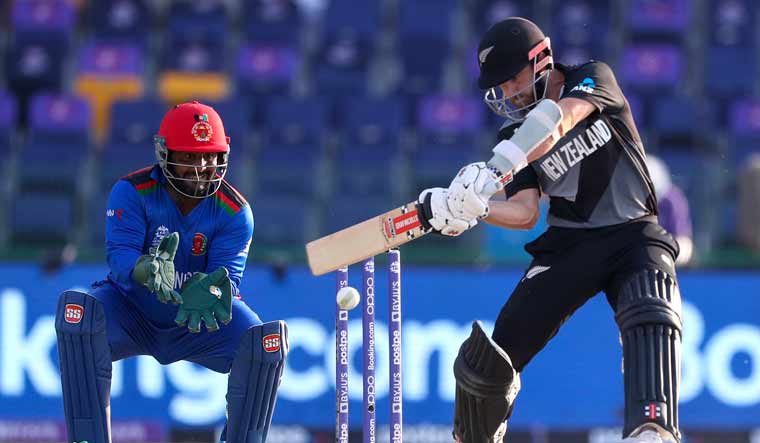 New Zealand comfortably beat Afghanistan by eight wickets in their final Super 12 match to qualify for the semi-finals and send India out of the T20 World Cup in Abu Dhabi on Sunday.

New Zealand chased down the small target of 125 with 11 balls to spare to secure a top-2 finish in Group 2 with eight points from five matches.

After back to back losses against Pakistan and New Zealand, India's prospects in the T20 World Cup appeared grim. But, after securing victories against Afghanistan and Scotland, India stood a chance at making the semi-finals provided Afghanistan could triumph over New Zealand in today's match.

Now, India, with four points from four matches, will not be able to qualify for the semifinals even if they defeat Namibia in their final Super 12 game on Monday.

Afghanistan ended their campaign on four points from five matches from which they secured two wins.

Captain Kane Williamson top-scored with an unbeaten 40 while Devon Conway contributed 36 not out.

For Afghanistan, Mujeeb Ur Rahman and Rashid Khan took a wicket each. This was Rashid Khan's 400th wicket in T20 cricket.

Earlier, opting to bat, Afghanistan posted 124 for 8, after New Zealand  took out most of their openers in the first four overs.

Najibullah Zadran top-scored for Afghanistan with a 73 while his other team-mates failed to make any substantial contribution.

For captain Mohammed Nabi, this may be the last time the team plays under their usual flag. With the Taliban having taken over Afghanistan in August, the cricket team reportedly faced pressure to compete under the Taliban's flag, according to a TRT World report. Likewise, the ICC too faced a dilemma over whether to allow Team Afghanistan to play, as it did not recognise the Taliban as a ruling force.

The Taliban have so far appeared supportive of the cricket team, congratulating it after their victory against Scotland. However, while Team Afghanistan victories are normally celebrated with fireworks, the streets of Kabul were mostly empty at the time.