T20 World Cup IND vs PAK: Three contests to look out for

Pakistan's captain has never played a T20I against India 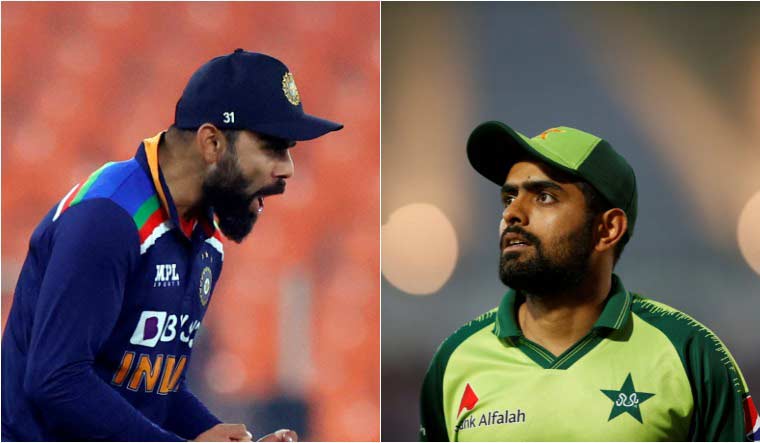 They say familiarity breeds contempt. While there’s always contempt surrounding an India-Pakistan match, especially from the outside, there is not a lot of familiarity on the field. Pakistan captain Babar Azam, for instance, has never played a T20I against India. Given the lack of data, any head-to-head matchups would have to rely on general form and speculation.

Here are three contests that many fans would be looking forward to on Sunday.

Jasprit Bumrah is arguably the best bowler in the world across formats. Babar Azam ranks second in the world among T20I batters and is Pakistan’s best.

In the National T20 Cup—a domestic tournament held earlier this month—Azam made 286 runs in six matches at an average of 71.50 and a strike rate of 143. He also made a hundred and two fifties. Though the level of competition might not have been that high in that competition, Azam showed continued form by scoring a fifty in the warm-up match against the West Indies.

Bumrah, on the other hand, had a good IPL season, picking up 21 wickets in 14 games at an economy rate of 7.45. He was among the most economical pacers in the season and had a strike rate of 15.71. Add to that the awkward action, which takes some getting used to, and Bumrah is likely to be a handful for the Pakistan batters. Azam has faced Bumrah only in ODIs, having scored 17 off 26 balls without losing his wicket.

A few years ago, there was a lot written about Rohit Sharma’s perceived weakness against the left-arm pace, especially that of Mohammad Amir. But the Rohit Sharma of today is a completely different batter. And, so, there will be no automatic advantage to Amir’s junior Shaheen Shah Afridi. What could work to his advantage, though, is recent form; in the National T20 Cup, Afridi got 12 wickets in six matches at an average of 17.16. In the warm-up matches for the World Cup, which are not a clear marker for effort or form, he got four wickets in two games.

As for Sharma, he played one warm-up match, scored 60 off 41 balls and retired hurt. Before that, though, he had a middling IPL, scoring 381 runs at an average of 29.30 and a strike rate of 127.42. Many expect him to be slow at the start of the innings, as he has been for some time, and let K.L. Rahul go for it. He might not take any risks against Afridi, but don’t expect him to be cowed down either. There’s a certain Zen to Sharma’s batting, and that could frustrate the 21-year-old Afridi. If the pitch offers swing, we’re in for a contest.

When Shoaib Malik made his international debut for Pakistan, Shaheen Afridi was one. Now that the age joke is out of the way, let’s talk about cricket. In the recently concluded National T20 Cup, Malik had a better average and strike rate than Babar Azam. That experience matters in T20s was proven when Chennai Super Kings won the IPL earlier this month.

Also, Malik is strong against spin; India’s leading wicket-taker in T20Is Yuzvendra Chahal said last year that Malik was better than Steve Smith at playing spin. Malik would most likely play in the middle overs when spin will be in play, and he would want to capitalise.

Given that Virat Kohli would likely use Ravindra Jadeja as a container, with him bowling stump to stump, Malik may be tempted to take him on. Jadeja has had a great IPL but as an all-rounder. His batting has overshadowed his bowling; he took 13 wickets in 16 games, at an average of 26.61, and with an economy rate of 7.06. He scored 227 runs at an average of 75.66 and at a strike rate of 145.51.

How both teams play the middle of the innings could be the deciding factor. And with Malik’s experience, the game could turn Pakistan’s way.