India vs Pakistan: What Hardik brings at No 6 cannot be created overnight, says Kohli

'We do not discuss our record against Pakistan, these are distractions,' he said 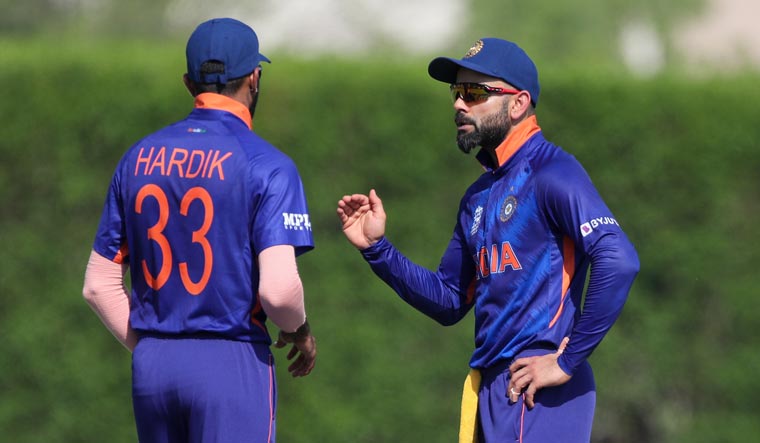 Backing Hardik Pandya to start in the playing XI against Pakistan, Virat Kohli said the value for Pandya as a number six finisher cannot be underestimated. The two nations will go head to head on Sunday in Dubai in their first match of the Super 12 stage of the T20 World Cup.

Speaking to the media ahead of the highly anticipated clash, the Indian skipper said: "[Pandya's] physical condition is getting better in terms of being prepared to bowl at least two overs at a certain stage in this tournament. We strongly believe we can make the most of the opportunity at hand till he starts bowling.

“We have a couple of options to chip in for two overs or so. We are not bothered about that at all. What [Pandya] brings at No 6, you cannot create overnight and I was always in favour of backing him in Australia purely as a batter and how he took the game away from the opposition in full flow.

Kohli did not reveal the final 12 for the match tomorrow.

“We have spoken about our combination. I am not going to reveal it right now. We have put in place a balanced team that covers all bases and we are very confident. Everyone has played a lot of T20 cricket in the IPL recently. Now, it is pure execution that is required."

On the India-Pakistan face-off always being a high-pressure match for the teams, Kohli said it was not difficult for the team to switch off from the build-up and hype on the outside.

“We are in charge of what we do on the field. For that to happen, we need to be in the most balanced space possible. It is also a thing to understand as professional cricketers you need to start thinking of a situation you will be in as batters and bowlers and focus on that.

“For a game like this, there is unnecessary stuff happening on the outside. That is fine as long as its stays outside. We just focus on what we need to do. It's never different from any other cricket game we play. Our mindset or approach is not different,” said Kohli.

Asked whether the team discusses India's perfect record against Pakistan in ICC World Cups, Kohli said the team did not do so.

"We do not discuss these things—what has been our record, what we have done in past. These things create a lot of distractions,” he said.

“What matters is how you prepare on the given day and play the game. Records only add to the pressure.

“Pakistan is a very strong team and has always been so. You have to play your best cricket against them. They have a lot of talented players who can change the game, against such teams you have to bring your best game forward and ensure execution is good.”

Kohli pointed out that the quality of wickets would be better than those that were seen during the recently concluded IPL, and thus the matches in Dubai and Abu Dabhi could be high scoring ones.

"I believe that quality of pitches definitely will be far better in this T20 World Cup. Being an ICC tournament, the standard of pitches have to be maintained. The wicket in the IPL final was very good. Even the dew factor is becoming prominent as we head into this time of the year in Dubai. It will help pitches play better. Abu Dabhi, Dubai are the best pitches and Sharjah will stay true to its nature—slow and low,” he said.