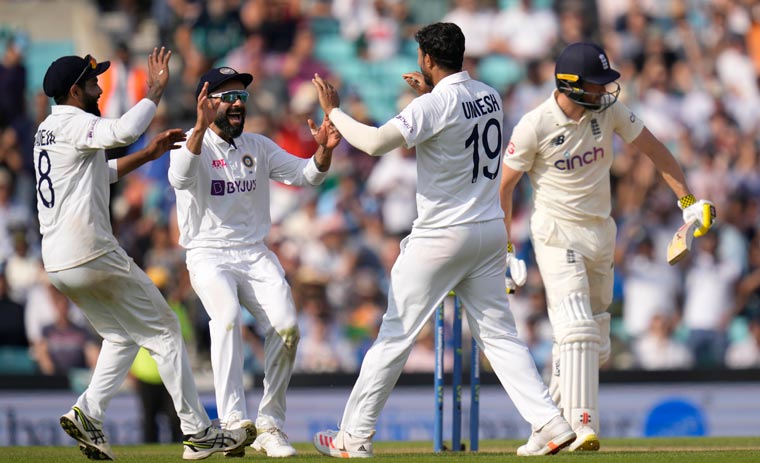 The fifth and final Test between India and England, which was suspended due to a COVID-19 outbreak last month, was on Friday rescheduled to July next year, a decision that has pushed the start of a limited-overs series between the two sides by six days.

The England and Wales Cricket Board (ECB) announced that the game has been moved to Edgbaston from Manchester and will be a part of India's white-ball tour. The game, which was called off after COVID-19 cases erupted in the Indian contingent, will be held from July 1.

"With India leading the series 2-1, the concluding fifth match will now take place from July 1, 2022, at Edgbaston, following an agreement between the England and Wales Cricket Board (ECB) and the Board of Control for Cricket in India (BCCI)," said the ECB in a statement.

Slotting the Test in the available window has ensured that the limited overs series would now start six days later from the original plan.

There is no addition to the number of white-ball games and it remains the same as originally planned. Had the suspended Test been ruled an abandonment or forfeiture by India, as was speculated extensively, the series would have ended 2-2.

The three-match T20 series will begin on July 7 at Ageas Bowl with Edgbaston and Trent Bridge hosting the second and third games on July 9 and 10 respectively.

The ODI series starts on July 12 at The Oval while the Lord's will host the second game on July 14 and the series will conclude at Old Trafford on July 17.

"Ticket holders do not have to take any action as all tickets will remain valid for the equivalent rearranged matchday at their host venue," the ECB said.

"Host venues will communicate the new fixture details to ticket purchasers and the options available to them, including the timeframe for requesting a refund if they are not able to attend the new match day," it added.

Last month, BCCI President Sourav Ganguly, in an interview to PTI, had made it clear that the rescheduled match would be an extension of the series and not a standalone game.

India were leading 2-1 when the match was called off after the visiting players refused to step on to the field following positive COVID-19 cases among its support staff, including head coach Ravi Shastri.

After main physio, Nitin Patel, tested positive during the third Test along with Shastri, bowling coach Bharat Arun and fielding coach R Sridhar and junior physio also Yogesh Parmar returned positive tests in the lead up to the series finale at Manchester, making the Indian players jittery about taking the field.

The ECB said the pre-planned events at Manchester forced the change in venue for the fifth Test. Manchester will now host the second Test against South Africa on August 25 instead of Edgbaston.

"I am delighted that the England-India Test series will now have its rightful conclusion. The four Test matches were riveting, and we needed a fitting finale," Shah said in a statement.

"The BCCI recognizes and respects the traditional form of the game and is also mindful of its role and obligations towards fellow Board Members.

"In the last two months, both BCCI and the ECB have been engaged in discussions and our efforts were aimed at finding a suitable window. I thank the ECB for their understanding and patience in finding an amicable solution," added Shah.

ECB CEO Tom Harrison said his board is glad to have closure for the lingering issue.

"We would like to apologise again to fans for the disruption and disappointment of September events. We know it was a day that so many had planned long in advance.

"We recognise that accommodating this extra match means a tighter schedule for the white ball series," he said.

"We will continue to manage our players' welfare and workloads through next year while we also continue to seek the optimum schedule for fans, players and our partners across the game."