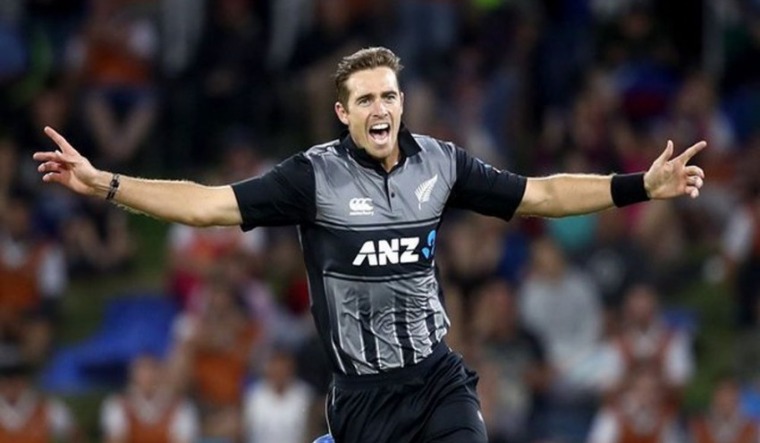 New Zealand pace bowler Tim Southee is known for his toe-crushing, swinging deliveries, but the conditions in the UAE, during the ICC Twenty20 World Cup, may not exactly help his trademark deliveries.

However, this is set to be Southee's fifth T20 World Cup, and the 32-year-old seamer is ready to adapt to the challenges posed by the conditions, especially the wickets, during the tournament.

Southee has a fair idea by now as far as the conditions in the UAE go, having been part of IPL runners-up Kolkata Knight Riders' squad. Though he played in just three matches and took three wickets, he spent enough time to assess what may work to help Team New Zealand come up with a successful campaign.

After winning the ICC Test Championship final, the Black Caps will no doubt be eyeing the T20 World Cup to round off a good year.

New Zealand are in Group Two of the Super 12s alongside India, Pakistan, Afghanistan plus two qualifiers.

In an interaction after joining the national squad in Dubai, Southee expressed satisfaction with his preparations during the IPL.

“It was a great ride. KKR had a disappointing first half of the tournament, played some very good cricket in the second half and managed to sneak through to the final. Overall, it was a great experience for me personally and for the guys involved in IPL. It was a good bit of preparation going into the T20 World Cup and conditions we will face,” said Southee.

Queried over the slow wickets that were prevalent during the IPL, barely affording any movement to the seamers, Southee said he feels the wickets could get better as the temperatures fall in the UAE, thus giving some help and hope to the fast bowlers.

He feels inputs from the likes of Stephen Fleming, former captain and current coach of Chennai Super Kings will be crucial.

Fleming will be assisting head coach Gary Stead after guiding CSK to their fourth IPL title.

“The wickets have been slightly different from what you usually expect here in the UAE, a touch on the slower side,” he said. “Seamers have done a reasonable job, used a lot of cutters instead of banging away into the wicket. Once the temperatures start to [drop], I am sure the wickets will improve, so the key is to adapt to conditions and use the knowledge of those involved in the IPL.

“We have got Stephen Fleming here, too, who has coached the IPL side, banking on that knowledge and coming up with a plan which will suit our side.”

New Zealand is yet to win a T20 World Cup and has never reached the finals in its previous six editions.

Southee said the upcoming two warm-up games for NZ against Australia and England would be crucial in giving match practice and opportunity to most Kiwi players to get used to conditions.

“For the guys who haven't played much cricket, it was good to have a run around yesterday. Two more games in the days ahead—that is a great lead-up into the tournament. Lockie Ferguson, Trent Boult and Kane Williamson have played a lot of cricket here (in the IPL).”

The T20 format has evolved over the years with not just the T20 World Cup becoming a regular feature every two years, but also thanks to the various domestic leagues in the short format in different countries.

Players are becoming specialists, plying their wares in different countries, while forsaking playing more for their own countries.

The game itself has seen changes from time to time—leg spinners were in high demand in the last edition, but finger spinners have struck back, coming up with enough variations to bamboozle and restrict batters and to get their skippers and coaches interested.

Reflecting on how much the T20 format has evolved, Southee said: “The game has changed. Guys are playing incredible shots now, bowlers are coming up with different variations, spinners are playing a massive role as well. You see a lot of mystery spinners but seamers are also developing different kinds of balls.

If you go back to the start of it, you just had a yorker, slower ball and you just bang away the ball. Now, bowlers have more deliveries, batters are able to hit more areas and fields are getting funkier as the game keeps growing.”