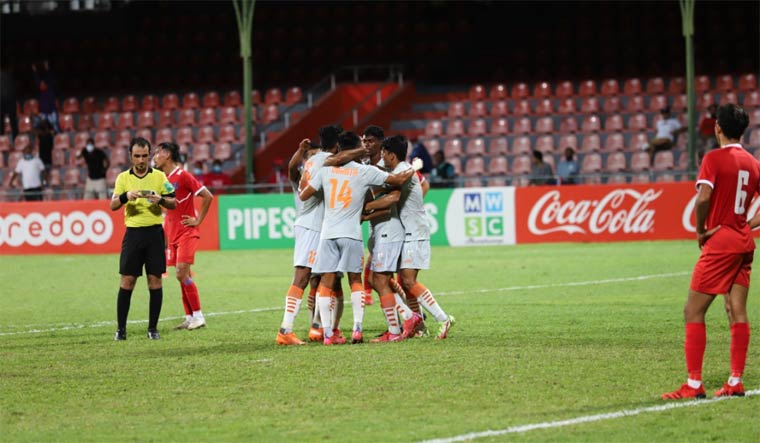 The national team's performance is often a fair reflection of any sport's growth in a country. By that yardstick, it won't be an exaggeration to say that Indian football has regressed in recent times.

The solitary-goal win over Nepal in the ongoing SAFF Championship on Sunday is an aberration in an otherwise hopeless run marked by the team's inability to eke out victories even against nations it had dominated in the past.

In a tournament which the country has won a record seven times, India found itself on the verge of being knocked out after two successive draws against lower-ranked Bangladesh and Sri Lanka.

The struggle for survival in the regional event tells a lot about the direction the team is headed.

Perhaps, even the win against Nepal wouldn't have come, had it not been for Sunil Chhetri's 82nd-minute strike.

👑 The Indian King equals The King! All hail the joint-8th top scorer in men's international history 🙇

It is true that alongside the national team's graph, a solid youth development programme and a vibrant and competitive league structure are equally important towards developing the sport in a holistic manner.

However, with the men's team hitting the lowest of lows in the SAFF tournament in the Maldives, the senior side and its head coach Igor Stimac have come under the scanner.

But before the powers that be of Indian football try their hands at resuscitating it from its present moribund state, they would do well to do two things: shun their top-down approach for a bottom-up approach, and recall former head coach Bob Houghton's scathing observation.

The All India Football Federation's top-down approach, which involved bidding for FIFA events, hosting them amid much fanfare, and basking in their organisational success, appears to have failed miserably in raising the standards of the national team of a country that has been showered with sobriquets such as "sleeping giants" and "passionate giants".

This method, in fact, was never meant to do any good. On the contrary, the national team's performance has dipped since the administrators trained their guns on bidding for, and organising, big tournaments on a priority basis.

"Youth development and only youth development is the way to go," agrees Shaji Prabhakaran, who has worked for years in the AIFF, besides being involved with FIFA and South Asian football.

"Top-down approach cannot work in isolation, that is helpful only in creating enthusiasm. The priority should be youth development," says Prabhakaran, who currently heads Football Delhi, the sport's governing body in the national capital.

As head of an affiliated state unit, Prabhakaran urged the AIFF to engage more with all the stakeholders.

Everything is centralised now, and the state units are becoming weaker and weaker.

"Ten years ago that was not the case, states were a part of the whole process. There is no holistic way of looking into the problems (now).

"Without resources, we were doing better earlier because they were working as one, now there is no teamwork, we have never had meetings on football development, there is no dialogue."

With far less resources and infrastructure than India, teams across the world have improved by leaps and bounds.

To cite an example, Vietnam is currently playing in the third round of the 2022 FIFA World Cup Qualifiers and a few years ago, Syria found itself on the verge of qualifying for the showpiece in Russia.

As far as some other Asian teams are concerned, the likes of South Korea, Japan, Iran and even Iraq have marched ahead, even as India slipped at various stages after competing on even keel against the best in the continent.

Thoughts of reaching the heydays of the 1950s and 60s—when the country won two Asian Games gold medals besides competing in the Olympics—seem farfetched at the moment.

The story was also different some years ago. Under Houghton, the team won three tournaments beating respectable sides such as Syria and Lebanon, besides qualifying for the AFC Asian Cup after a gap of 24 years.

Then there was that record unbeaten run under Stephen Constantine, which also led to an Asian Cup qualification.

And then came the slide.

Constantine's successor, Stimac has come under criticism in recent times for his approach that has not yielded results, but he is neither the problem nor the solution.

While the AIFF will have its say on the matter, simply getting rid of the coach will amount to nothing if the more pressing issues are not addressed.

About two years before his unceremonious exit in 2011, a miffed Houghton had remarked: "You can remove the coach and you can bring Guus Hiddink or Jose Mourinho tomorrow and you will still be (ranked) 140 (then)."

More than 12 years ago, Houghton's frustrations were aimed at those in charge of the game in the country.

And while there has no doubt been an improvement in infrastructure and increase in resources, over a decade after the Briton's remark, the senior national team's utter lack of success remains a major cause for concern.

Quick-fix solutions will not take Indian football anywhere and the current dispensation must realise that only hosting big FIFA-sanctioned events would not mask the problems facing the sport.

It's also a matter of great concern that the sport has not found a worthy successor to Chhetri, who at 37, is in the last leg of his glorious career. But ask the experts, and they are certain that there is no dearth of talent in India.

They are not off the mark. For the uninitiated, a glance through the archives of Indian football would be enough to understand why they remain optimistic.