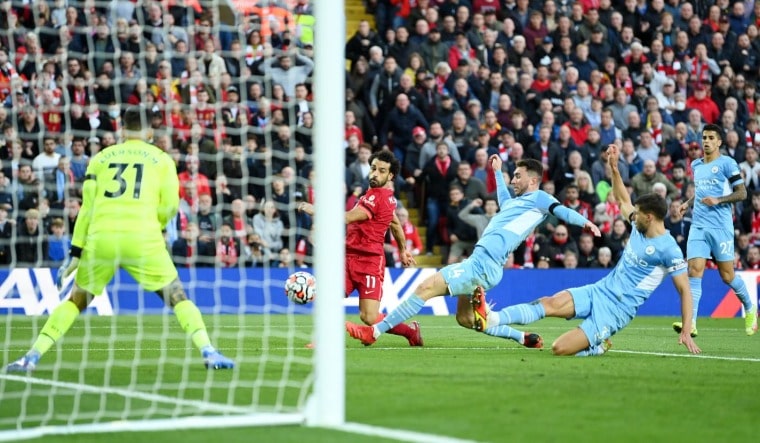 Liverpool and Manchester City played out a thrilling 2-2 draw in the English Premier League on Sunday, delivering on the hype around the fixture involving the last two champions of England.

Though City thoroughly dominated the first half—in part due to Liverpool’s sloppiness with the ball—the second half was an even contest as the Anfield crowd got behind their team and were treated to one of the best games of the season so far.

All four goals were spectacularly created and executed, and all of them were scored in a pulsating second half.

Despite looking out of colour for 45 minutes, Liverpool burst to life as soon as the second half began.

In the 59th minute, Senegalese forward Sadio Mane collected a through ball from Mohamed Salah on the break and sniped it past City goalkeeper Ederson, stunning everybody.

City pressed the Liverpool goal, desperate for the equaliser, which came 10 minutes after the opener, through a drilled shot by Phil Foden, who was City’s best player of the night.

Both teams continued to attack relentlessly, until Salah scored one for the ages in the 76th minute.

The Egyptian magician weaved his way past several City defender, twisting and turning, before slotting the ball into the far corner of the post, past a baffled Ederson.

Exactly five minutes later, the usually enterprising Kevin de Bruyne, who was surprisingly ineffective until then, shot at goal from the edge of the box. The ball took a kind deflection before nestling in the back of the net.

More chances and gasping goal-line saves followed until the very end of stoppage time. At the end, both teams deservedly walked away with a single point.

“What a game. That's the reason [over] the last years Man City and Liverpool are always there because we try to play in this way,” City coach Pep Guardiola said after the game.

The draw puts Liverpool at second place while Manchester City are third. Chelsea benefitted from the result to stay on top of the table, a single point ahead of Liverpool.

The next round of Premier League fixtures will be held on October 16/17 after the international break this week.