A look at the big games in European football this weekend 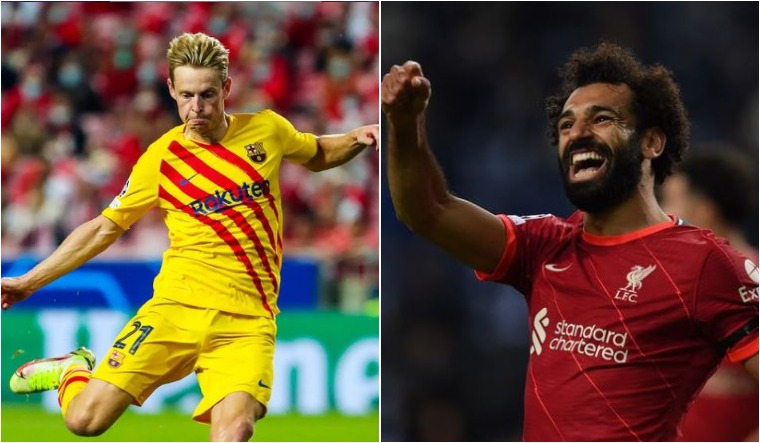 After an interesting midweek of Champions League action, the teams return to their domestic competitions with some big clashes in store.

A look at what is happening in European football this weekend:

Ronald Koeman could be facing his last game in charge of Barcelona when the club faces a challenging trip to defending champions Atlético Madrid.

The Dutch coach is under extreme pressure after Barcelona strung together embarrassing losses in the Champions League, and Spain's press is humming with rumours that he could be fired regardless of the result.

Koeman will not be in the dugout while he serves the second of a two-game suspension for protesting. The match will be the first for forward Antoine Griezmann since leaving the cash-strapped Barcelona on loan to return to Atlético.

Real Madrid may be sitting pretty at the top of La Liga table, but their last two games—a draw against Villareal and a shock defeat to Sheriff Tiraspol in the Champions League—have shaken the team. On Sunday, they will face Espanyol, who have collected just six points from their seven games this season.

Atletico Madrid vs Barcelona – 12.30am, Sunday

The last two champions of English football, Liverpool and Manchester City, will face off at Anfield in what should be a cracker of a contest. The two teams currently occupy the top two spots on the table.

There are a few injuries for Jurgen Klopp’s team, including right-back Trent Alexander-Arnold and midfield pair of Thiago and Harvey Elliott. Pep Guardiola has a full squad to choose from.

The teams come into the weekend off contrasting Champions League outings—Liverpool thrashed Porto 5-1 and City lost to PSG 0-2. Liverpool are currently undefeated in the league.

For the third time this season, Manchester United plays in the Saturday lunchtime game as Everton travels to Old Trafford. It is another quick turnaround for United, which was in action in the Champions League on Wednesday when Cristiano Ronaldo’s late goal earned a 2-1 win over Villareal.

Ole Gunnar Solskjaer’s side lost last weekend in the league in a limp performance against Aston Villa.

It will be a tough test against Rafa Benitez’s side, which could go above United with a win.

Five teams are without a win after six matches for the first time in England’s top division since 1964: Newcastle, Leeds, Southampton, Burnley and Norwich.

Struggling in Serie A, Juventus faces Torino in a derby looking to build on its Champions League victory over Chelsea.

Returning Juventus coach Massimiliano Allegri had been slow to make Federico Chiesa the focus of his attack but the Italy international was given the job by default against Chelsea after injuries to Paulo Dybala and Alvaro Morata.

Chiesa responded by scoring against Chelsea in a standout performance and he’ll again be expected to have a major role against Torino.

The other big game of the week is AC Milan versus Atalanta. The Milan giants have started the season well under Stefano Pioli, dropping just two points in their opening six games.

Atalanta on the other hand are yet to discover their usual goalscoring form, sitting at seventh on the Serie A table.

Atalanta have gotten the better of Milan in recent meetings.

Borussia Dortmund is again without injured striker Erling Haaland as it hosts Augsburg in the Bundesliga’s eighth round.

Marco Rose's team has dearly missed the Norwegian forward in the two games he's been absent from—a 1-0 loss to Borussia Mönchengladbach last weekend followed by an unimpressive 1-0 win over Sporting Lisbon in the Champions League on Tuesday.