Chasing 135 to win, CSK reached the target with two balls to spare 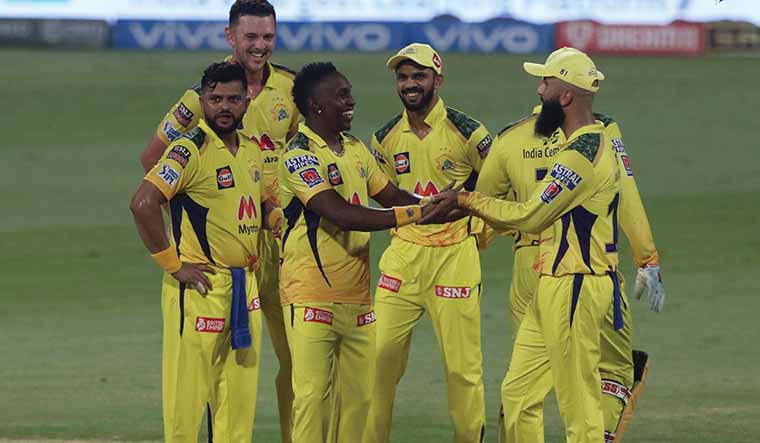 Chennai Super Kings survived some anxious moments before managing to pull off a six-wicket win against Sunrisers Hyderabad in an IPL 2021 match in Sharjah. Chasing a mere 135 to win, CSK won with two balls to spare, with skipper Mahendra Singh Dhoni finishing the match with a six.

Dhoni (14*) and Ambati Rayudu (17*), however, struggled to score in the death overs. With 16 needed off the last two overs, SRH’s Bhuvneshwar Kumar gave away 13 runs in the 19th over to effectively end his team’s hopes of an unlikely win.

With the win, CSK became the first team to qualify for the playoffs this season, while SRH were eliminated from the final-four race.

CSK, in fact, were cruising at 75/0 in the 11th over after yet another strong start from Ruturaj Gaikwad (45) and Faf du Plessis (41), before the former fell to Jason Holder (3/27), who was the pick of the SRH bowlers. It exposed CSK’s wobbly middle-order as Moeen Ali (17), Suresh Raina (2) and du Plessis fell within the next five overs.

But, despite the fightback from SRH bowlers, the score proved to be inadequate as CSK consolidated their position at the top of the table with the nervy win.

Earlier, CSK put up another disciplined bowling performance to restrict Sunrisers Hyderabad to 134/7.

The Sharjah surface, which produced high-scoring games last year, has been a complete contrast this season with its slow nature making stroke making difficult.

SRH innings never got the momentum it needed and ended up with a total that CSK should chase down comfortably.

Wriddhiman Saha played some delightful shots in his 46-ball 44 but the majority of the SRH batsmen struggled to get going.

Saha's two sixes off Deepak Chahar in third over were the highlight of his innings. The first one was a hoick over midwicket and the second one was more like a lofted straight drive that cleared the ropes comfortably.

His opening partner Jason Roy fell cheaply, caught behind off Josh Hazlewood as he went for a wild slog.

Skipper Kane Williamson struck two fours in his run-a-ball 11 before he was trapped in front by Dwayne Bravo with a full ball that swung away slightly to thud into the New Zealander's pads.

SRH were left reeling at 74 for four after a well-set Saha top-edged one off Ravindra Jadeja to be caught by M S Dhoni.

SRH, who reached 97 for four in 15 overs, badly needed a final flourish in the last five overs.

Abdul Samad (18 off 14) and Abhishek Sharma (18 off 13) hit a few sensational shots before Hazlewood removed them in the 17th over.

CSK were brilliant in the death overs conceding only 37 runs.