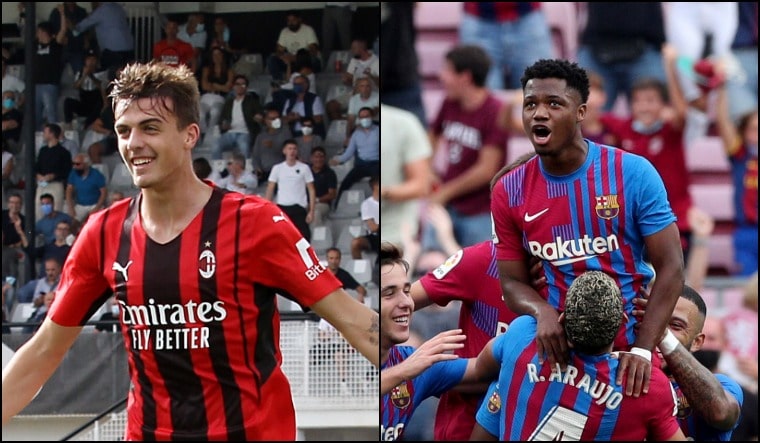 AC Milan legend Paolo Maldini beamed from the stands as his 19-year-old son Daniel scored on his first league start for the Italian club that three generations of Maldinis have now scored for.

Paolo and his father Cesar are legends of the club and Daniel followed in their footsteps when he opened the scoring against Spezia in the 48th minute.

AC Milan were briefly at the top of the Serie A after the 2-1 win over Spezia until Napoli's 2-0 victory over Cagliari. Napoli's perfect start to the season—six wins out of six—is setting the pace for the league after champions Inter Milan were held to a thrilling 2-2 draw by Atalanta.

Juventus beat Sampdoria 3-2 to make it two wins on the bounce after a disappointing start to the season. But despite the win, there were injuries to star attackers Paolo Dybala and Alvaro Morata that will rule them out of the big Champions League clash against Chelsea.

English champion Pep Guardiola got the better of European champion Thomas Tuchel in his fourth attempt after Manchester City lost their last three matches to Chelsea since the German manager took over.

Chelsea were comprehensively outclassed as City pressed the London side into submission in a 1-0 victory at Stamford Bridge. Gabriel Jesus scored the lone goal of the game.

Manchester United were stunned by Aston Villa in a 0-1 defeat at Old Trafford thanks to a 88-minute goal by Kortney Hause and a stoppage-time penalty miss by Bruno Fernandes.

Liverpool was held by lowly Brentford in an entertaining 3-3 draw—which keeps them at the top of the table—while Arsenal's season has roared to life with an emphatic 3-1 victory over London rivals Tottenham Hotspur.

Fati back with a bang

FC Barcelona's wonder boy Ansu Fati made his first appearance for the team since last November, and it showed why he has been missed for so long. On his return from a serious knee injury, Fati scored his team's third goal in a 3-0 win over Levante.

Having inherited the No 10 jersey from Lionel Messi, 18-year-old Fati came on in the 81st minute and fired a low strike from the edge of the box 10 minutes later to cap a memorable return.

The win takes Barcelona up to sixth in La Liga table, five points behind leader Real Madrid, who were left frustrated by Villareal in a goalless draw.

Meanwhile, champions Atletico Madrid were stunned by a solitary Alaves goal to end their unbeaten start to the season.

In Germany, in-form Borussia Dortmund was shot down by Borussia Monchengladbach in a 0-1 defeat. Dortmund were without veteran star Marco Reus and the young goal machine Erling Haaland and were even reduced to 10-man in the first half after Mo Dahoud received a red card.

RB Leipzig smashed six past a hapless Hertha Berlin to end a poor run of results for the club, and Robert Lewandowski's record of scoring in 19 games in a row came to an end as he failed to find the net in Bayern Munich's 3-1 victory over Greuther Furth.

In France, Paris Saint Germain maintained their perfect start in Ligue 1 with a 2-0 win over Montpellier. Messi missed his second consecutive game for the club with a knee injury.

Angel di Maria played alongside Neymar and Kylian Mbappe in attack, though all three of them looked off colour.

Just eight games into the season, PSG have a nine-point lead over second-placed Lens, and are 10 ahead of Marseille, who are third but with a game in hand.

Manchester United vs Villareal – Thursday, 12:30am

(all times in IST)