Capitals eked out the easy win in 17.5 overs in their pursuit of 135-run target 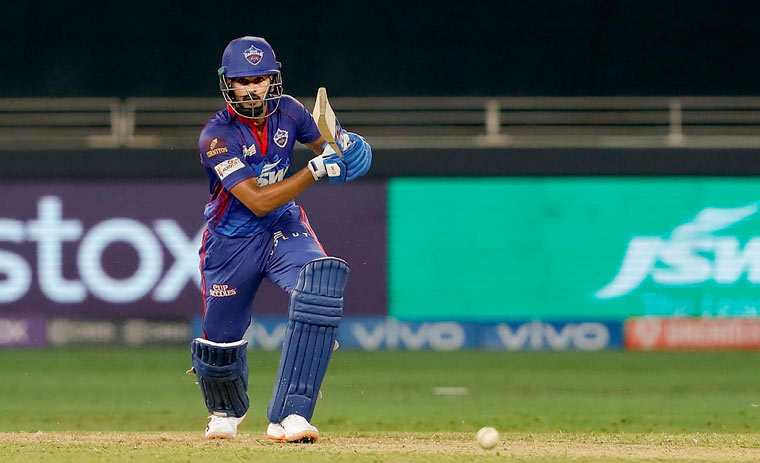 Capitals produced top-notch performance in their first match of the second phase of this year's IPL to eke out the easy win in 17.5 overs in their pursuit of a modest 135-run target.

It was only possible after fast furious Nortje bowled at 150 clicks to finish with 2 for 12 and was ably supported Rabada (3/37) and Axar Patel (2/21) in a brilliant bowling effort.

Last edition's runners-up are now well and truly in contention for clinching a play-off berth with 14 points from nine games while SRH with two points are all but out of the competition.

DC started their chase on an aggressive note with Shikhar Dhawan and young Prithvi Shaw (11 off 8) adding 20 runs in 17 balls before the latter was caught by Kane Williamson off the bowlng of Khaleel Ahmed as the batsman went for an extravagant shot over mid-wicket.

Orange Cap Dhawan was unperturbed as he continued his attacking batting and slog swept Rashid Khan over deep midwicket for a maximum in the Afghan spinner's first over.

While SRH batsmen struggled, Dhawan made batting look easy on the wicket as he then pulled a Jason Holder delivery on to the square leg fence.

Swing bowler Sandeep Sharma was then taken to task by Dhawan as he hit the medium pacer for back-to-back boundaries in the 10th over take DC to 69 for one.

But Dhawan paid the price for being too aggressive when he was holed out by Abdul Samad off the bowling of Rashid as the left-hander went for a slog sweep over deep square leg in search of a six.

Dhawan's runs came off 37 balls and was laced with six boundaries and one hit over the fence.

Shreyas Iyer (47 not out off 41), who played the second fiddle when Dhawan was around, then took the onus on himself and upped the ante, hitting Sandeep Sharma for two consecutive fours in the 14th over.

Iyer continued to bat freely and in the company of skipper Rishabh Pant (35 off 21) took DC home with 13 balls to spare.

While Khaleel Ahmed extracted some pace and bounce from the track, none other SRH bowlers managed to trouble the DC batsmen as Iyer and Pant batted with consummate ease.

Iyer hit two fours and as many sixes during his knock, while Pant decorated his innings with three boundaries and two lofty hits over the fence.

Earlier, SRH put up a dismal batting performance to manage a meagre 134 for nine.

Nortje and Rabada were terrific with the ball as they extracted extra bounce and pace from the relatively low and slow wicket to dismantle SRH top-order.

The script didn't turn out as SRH wanted after opting to bat as they lost David Warner (0) in the third ball of the innings without any runs on the board.

Wriddhiman Saha (18) then added 29 runs with skipper Kane Williamson (18) before the former mistimed a pull to Shikhar Dawan at midwicket of the bowling off Kagiso Rabada.

Williamson and Manish Pandey then tried to build the innings, stitching 31 runs for the third wicket but SRH soon suffered a jolt when their skipper gave a simple catch to Shimron Hetmyer at long-off off the bowling of Axar Patel.

Pandey (18) followed suit and Kedar Jadhav (3) too didn't help his cause either.

Jason Holder (10) too turned out to be a big flop for SRH.

Damage already done, Abdul Samad (28 off 21, 2x4s, 1x6) tried his best to shore up the run-rate in company of Rashid Khan (22 off 19 balls) but he too departed in search of quick runs, top-edging a miss-timed pull to DC skipper Rishabh Pant off Rabada's bowling.

Rashid's knock was laced with the help of two fours and one six before being run out. Bhuvneshwar Kumar remained not out on 5 from 3 balls.