Struggling Barcelona salvage a point against Granada in La Liga 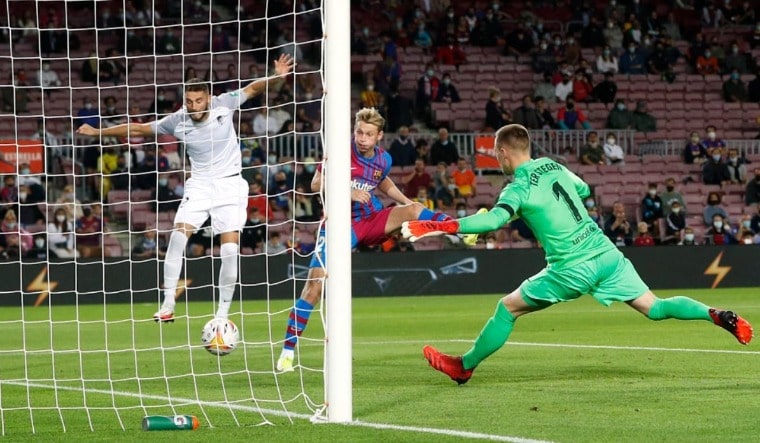 Ronald Araujo’s headed goal in stoppage time against Granada spared Barcelona the blushes in their Monday night La Liga clash. The 1-1 draw comes days after coach Ronald Koeman’s men were outclassed by Bayern Munich in the Champions League as life after the departure of Lionel Messi continues to be rocky.

Koeman was heavily criticised by Barcelona fans for ditching the club’s traditional passing style against Granada. The Dutch legend went for a more direct attacking approach, even playing defenders Gerard Pique and Araujo in attack in the latter part of the second half.

For Granada, defender Domingos Duarte gave the visitors the lead in just the second minute of the game, stunning the home crowd to silence. As the game wore on, Barcelona players and fans grew frustrated, forcing Koeman to push his tall centre-backs up front, in a desperate attempt to salvage a point.

It resulted in Barcelona players sending a whopping 54 crosses into the opponent’s box, with the last effort eventually finding the net. But that was not enough for the Blaugrana supporters, who booed and whistled the players off the pitch.

“If you see the list of players, what do you do? Play tiki-taki? Tiki-taki when there are no spaces?” Koeman retorted after the game. “We did what we had to do. We tried to win another way. We don’t have players one-on-one or with speed… I’m not going to say more because it seems I have to argue about everything.”

Both teams came very close to scoring more goals for their teams, but despite Barcelona’s lion share of possession, it was a deserved point for Granada.

While the result leaves Barcelona in seventh place on La Liga table—five behind leader Real Madrid—Granada are yet to register a victory in their five games.

Barcelona were always going to find life difficult after Messi’s departure this summer, considering how many times the six-time Ballon d’Or winner has bailed them out of difficult situations. This was expected to be a season of rebuilding, but Koeman’s job already looks like it is on the line.

He has a fraught relationship with club president Joan Laporta, who has been looking for every reason to remove the coach. If results don’t improve, and if Koeman continues to reject the style of football that the fan base holds dear, it could be the end of his time at the club.

Though a Barcelona legend himself, Koeman’s return as head coach of the team did not go well with fans as he disregarded club seniors like Messi and Luis Suarez on arrival, he does not possess a great coaching profile and he does not have a particular footballing philosophy.

Koeman's real test of the season will be in October, when the club will face Atletico Madrid, Valencia and Real Madrid in La Liga and play in the Champions League in a run of four crucial consecutive games.