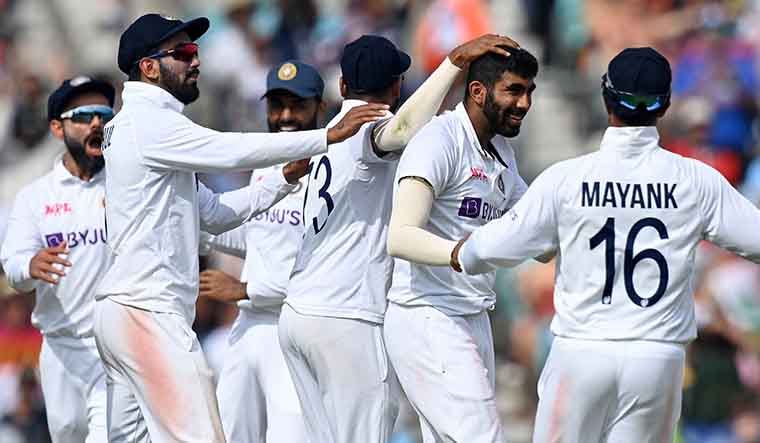 Jasprit Bumrah celebrates with teammates after taking the wicket of England's Jonny Bairstow (unseen) on day 5 of the fourth Test match, at The Oval cricket ground in London | AFP

All the 21 players of the Indian Test squad have tested negative for COVID-19, a development that clears the decks for the fifth Test against England to proceed as scheduled from Friday after the uncertainty triggered by a positive case in the visiting contingent.

The entire Indian group had to undergo RT-PCR tests after assistant physio Yogesh Parmar tested positive for COVID-19 on Thursday.

The Indians had already lost their head physio Nitin Patel, who is currently in isolation after testing positive along with head coach Ravi Shastri and bowling coach Bharath Arun in London.

"All the players have returned with negative test," a senior BCCI source told PTI on Friday.

While chances have increased of the Test match happening, sources are also saying that at least one senior Indian player doesn't want to take the field as he fears someone might test positive while playing the game.

The BCCI is trying to persuade that senior cricketer, whose family is also against him playing the game, according to a source.