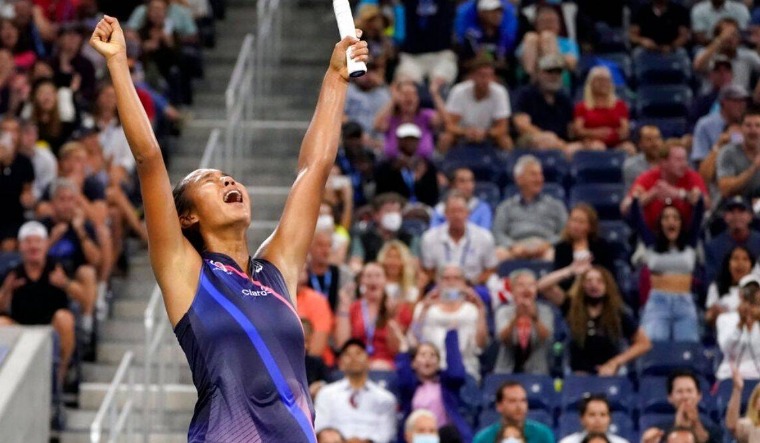 Leylah Fernandez reacts after defeating Angelique Kerber, of Germany, during the fourth round of the US Open | AP

Leylah Fernandez is a self-described “happy-go-lucky girl” having the time of her life at Flushing Meadows, raising her fists, pumping her arms and riling up crowds while beating two past US Open champions to reach her first Grand Slam quarterfinal.

A day before her 19th birthday, the unseeded left-hander from Canada grabbed the last five games to eliminate 2016 title winner Angelique Kerber 4-6, 7-6 (5), 6-2 on Sunday, demonstrating that an earlier upset of defending champion Naomi Osaka was certainly no fluke.

With grit and guile, plus a veteran's poise in the face of big deficits against much more accomplished opponents, Fernandez is displaying strokes and a demeanor that left Kerber offering this assessment: "She can go really far in the next few years.”

How about over the next week?

There's no time like the present for the teens in tennis: Also into the quarterfinals with a win Sunday was Carlos Alcaraz, an 18-year-old from Spain who became the youngest man to get that far at the US Open since 1963 by outlasting his 32-year-old foe, 141st-ranked qualifier Peter Gojowczyk of Germany, 5-7, 6-1, 5-7, 6-2, 6-0.

“At some point, age is just a number,” Auger-Aliassime when asked about Alcaraz.

"He already feels like a player that is established."

The 55th-ranked Alcaraz got past No. 3 Stefanos Tsitsipas in his previous match and is the youngest player with two five-set Grand Slam wins in a row since Michael Chang was 16 at the 1988 US Open.

There's yet another 18-year-old in fourth-round action Monday: Emma Raducanu of Britain, who plays Shelby Rogers of the US

Ask Fernandez for the secret to her success, and she repeatedly mentions two factors. One is being sure to enjoy her time on court. The other is support of family, because her father, who is from Ecuador, her mother, who is Filipino Canadian, and her sisters “have definitely kept the joy for me.”

She credits Dad — who coaches her and has been offering instructions in daily phone calls while back home, taking care of a younger sibling — and Mom — who is leading the cheers with other family members and Fernandez's fitness trainer in courtside seats — with teaching a valuable lesson that has nothing to do with tennis.

They made sure to emphasize, Fernandez said, that "you can't take things too seriously, you've got to be mature but at the same time just be a kid, let loose, have fun, eat chocolate when you want to, and just have fun, watch movies, go past your bedtime.”

Just as against Osaka in Arthur Ashe Stadium two nights earlier, Fernandez dropped the opening set against Kerber in Louis Armstrong Stadium, which was so full that would-be spectators were being turned away at the doors.

And just as against Osaka, Fernandez trailed in the second set: Kerber led by a break at 4-2.

Both times, the 73rd-ranked Fernandez managed to get folks in the seats on her side, exulting with every of her on-the-run, impossible-angle groundstrokes that added up to a 45-28 edge in winners.

Fernandez redirects opponent's shots swiftly and seemingly with ease, sometimes dropping to a knee near the baseline to get the proper leverage. That's a very similar style to the one another lefty, Kerber, used to reach No. 1 in the rankings and claim three Grand Slam titles.

Kerber is 33 and has been playing well enough lately to get to the Wimbledon semifinals in July, but instead of that experience paying off, Fernandez figured the age difference worked in her favor as the contest stretched past two hours.

“I was honestly tired in the third set," Fernandez acknowledged.

“But with that thought, I was telling myself, like, If I'm tired, she must be exhausted.'”

Still, in the last set, Kerber held a break point with a chance to go up 3-1. Fernandez erased that chance with a cross-court forehand winner. Kerber wouldn't claim another game.

When it ended, Fernandez lifted her arms, then leaned forward to put her hands on her knees and smiled. She stood and patted her chest with her palm, while Kerber walked around the net to offer a clasp of hands and an arm around Fernandez's shoulders.

“I remember the feeling really well,” Kerber said when asked about playing with the sort of loose-grip freedom Fernandez displays.

“I mean it's (a) few years ago. But of course, I mean, she has no pressure.” Now Fernandez, who only once had been as far as the third round at a major tournament until now, will meet No. 5 seed Elina Svitolina in the quarterfinals. Another women's matchup Tuesday will be No. 2 Aryna Sabalenka against two-time Grand Slam champion Garbiñe Muguruza or 2021 French Open champ Barbora Krejcikova.

Fernandez and Alcaraz are among several fresh faces making moves at this most tumultuous of US Opens, where the question at the start of each day has become, “Who will pull off a surprise?” — and there tend to be multiple answers by each night.

Consider Botic van de Zandschulp also part of Sunday's group. He's a 25-year-old Dutchman ranked 117th who became just the third male qualifier to get to the quarterfinals at Flushing Meadows since the Open era began in 1968.

Next for van de Zandschulp comes No. 2 Daniil Medvedev, while Alcaraz will go up against No. 12 Felix Auger-Aliassime or Frances Tiafoe.

“Before the tournament,” van de Zandschulp observed, “no one expected me to reach the quarterfinals here.”

Seems fair. And applies to players such as Fernandez and Alcaraz, too.