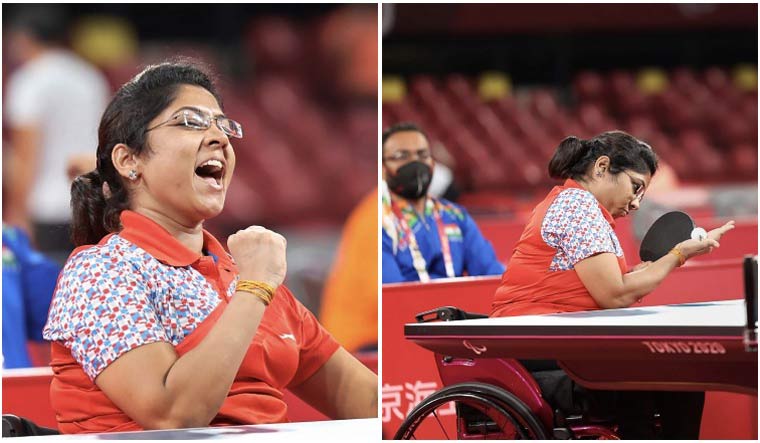 Bhavina Patel is on the cusp of a historic gold having entered the finals of Table Tennis in class 4 event at Tokyo Paralympics but the journey has been anything but easy.

That she has come this far is a testament to her hard work and determination, something the members of the Blind People’s Association in Ahmedabad can vouch for.

She plays the final early on Sunday.

Born in north Gujarat in 1986, Bhavina moved to Ahmedabad after her marriage to Nikunj.

She joined an ITI course at the BPA and then got interested in Table Tennis. General Secretary of Blind People’s Association (India) Bhushan Punani told THE WEEK that table tennis was new for her and she would practise for five to six hours a day.

Apart from playing in the nationals, Bhavina has also participated in the Commonwealth Games in 2010.

Punani said that Bhavina has triple disability. “She is wheelchair-bound, and comes from a small village. Despite being a girl with disability, she studied in a normal school,” he said.

Bhavina, who had gone to the United Kingdom before the Commonwealth Games for coaching, never let practice time go waste. Said Punani, “The moment relaxations were given in COVID-19, she returned to the BPA for practice and later on, the Sports Authority of Gujarat gave her a table at home so that she does not need to step out for practice.”

Punani said that he had a word with Bhavina and she is upbeat ahead of Sunday’s final. “In fact, she was more worried about today’s match (semifinal) but the victory was easy. This has given her more confidence,” he said.

Gujarat Chief Minister Vijay Rupani also wished Bhavina for the finals. Taking to social media, he said that she has made Gujarat proud. Prime Minister Narendra Modi, too, had tweeted congratulating her on the win.

The Association’s social media is flooded with pictures of Bhavina’s achievements. It also has her and fellow paddler Sonal Patel’s photograph with Modi taken in 2009 when the latter was the chief minister of Gujarat.

Bhavina and Sonal will also play doubles in the category.