24 new COVID cases reported at Olympics, even as Tokyo logs over 3,800 infections 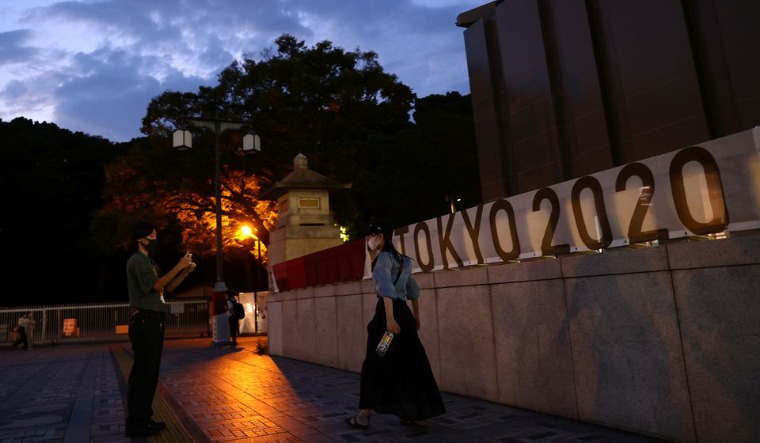 Fans in front of a banner at the Tokyo Olympics | Reuters

The Tokyo Olympics organisers on Thursday announced 24 new COVID-19 cases, including three athletes, the highest one-day figures so far at the Games, even as the organisers insisted that the showpiece is not behind the record surge in the host city.

The city logged in an all-time high of 3,865 positive cases on Thursday. Three new deaths were recorded with 81 patients being described as "severe cases".

Reacting promptly, the International Olympic Committee's (IOC) spokesperson Mark Adams said the Games are not responsible for the surge in coronavirus infections in Tokyo, according to public broadcaster NHK.

The fresh additions took the total number of Games-related cases to 193.

Authorities are alarmed by the Japanese capital setting an all-time high and closing in on 4,000 cases, only a day after crossing the 3,000 mark for the first time. The host city is in a state of emergency with COVID-19 infections at a record high.

Out of the 24 positive cases, six are Games-concerned personnel and 15 are contractors, besides the three athletes.

Tokyo had recorded 3,177 cases on Wednesday, while the COVID-19 infection numbers for the whole country was an all-time high of 9,583, the first time the figure has topped 9,000.

On Wednesday, 16 Olympics-related cases were reported but none were athletes and none were staying in the Games Village.

The total number of cases in the Games village currently stands at 23.

The organisers had said 38,484 people from abroad had entered Japan for the Games till Monday.

Japan has kept its cases and deaths lower than many other countries, but its seven-day average is increasing, according to the country's health ministry.

Meanwhile, the IOC spokesman Adams said there was nothing to suggest a link between the Games and the rising figures.

"As far as I'm aware, there's not a single case of an infection spreading to the Tokyo population from the athletes or Olympic movement," he told reporters in Tokyo.

"We have the most tested community probably anywhere... in the world, on top of that you have some of the toughest lockdown restrictions in the athlete's village," he added.

The organisers also insisted that the Games are not burdening the city's medical system.

Adams said only two people associated with the Games are in hospital, and half of all those needing care are being looked after by their own medical teams.