Olympic-bound Chirag on spectre of COVID-19, loss of loved one & Tokyo dreams 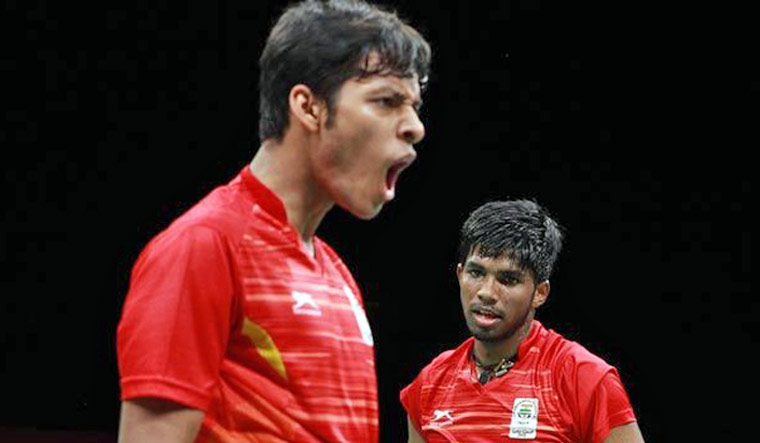 His grandfather was among those who lost their lives during the devastating second wave of COVID-19 in India and doubles badminton player Chirag Shetty says it was his Olympic dream that helped him break away from the grief.

During a four-day break from training in Mumbai in April, Chirag lost his maternal grandfather to COVID-19, which also infected his uncle and none could attend the funeral.

"It was a difficult phase," the shuttler, who will leave for Tokyo on Saturday with the first batch of the Indian contingent, recalled during an interview to PTI.

"In April, when the situation was pretty bad in India, seeing so many people die because of COVID was tough. In my family, I lost my maternal grandfather, it was a difficult time," he said.

"But the good thing was I was able to practice, so I could detach myself from it, badminton really helped. But it was a really difficult phase."

More than three months have passed since the loss but COVID-19 continues to wreak havoc on the lives of people around the globe and Chirag says the athletes travelling to Tokyo won't be immune to the fear of the virus either.

"Playing in the Olympics is the highest honour but at this point of time, with the pandemic still going on, everyone is a bit scared about false positives coming out. So we don't know how things would be in Tokyo," he says.

"Not just me, all the athletes will be a bit scared about the situation there because of the false positives that we faced in Thailand," he added referring to the false-positive cases that affected the players in Thailand Open and the All England Championship.

Did it affect training as well?

"It was definitely difficult to train, firstly because there were not many tournaments. In April and May, the situation was pretty bad and there was a lockdown, and training in such difficult conditions was tough but we stuck to it," Chirag said.

The 23-year-old from Mumbai feels this global health crisis can also have an impact on the performance at the Olympics but he is trying to stay positive.

"Definitely, it can affect performance in Olympics but personally we need to keep in mind, that if tournaments have to go ahead, then we will have to take the test every day.

"We will have to see the brighter side that even during the pandemic, an event as big as Olympics is taking place and we must keep ourselves safe as much as possible."

For the last few months, Chirag and his men's doubles partner Satwiksairaj Rankireddy have been putting in the hard yards under new foreign coach Mathias Boe, a former world no.1 and London Olympics silver-medallist.

"Training has been really good with Mathias so far. It has been 5-6 months and we have really been able to work on specific areas like defence," Chirag says.

The Indian duo has worked with three different coaches—  Malaysia's Kim Tan Her, Indonesian Flandy Limpele, and Boe — in the last few years.

"One thing that is different between the three coaches is that Mathias is a lot more technical.

"There is a lot of similarity between Tan and him, while Flandy had a power-based training program. He used to push us on the physical aspect, while the other two make us do on-court drills to improve us technically."

Chirag said Mathias has helped them to give more thought to their strokes and understand how to tackle crucial match situations.

"I think if one wants to become a complete player, you need to know all the tricks, you may master a few but you just can't stick to the things you are good at, you need a few more things in your armour.

"You need to be ready if your 'A' game doesn't work, that is what we learned from Mathias and also playing in the crucial stages, how he sees the situation and executes strategies, that is something we have been able to learn from him."

Chirag said the experience of training under different coaches will hold them in good stead at Olympics.

"We have been lucky enough to learn from both Asian and European coaches. Hope it puts us in an advantageous position. We have been practising really hard," he said.

The duo has been placed in Group A alongside top-seed and world No.1 Indonesian duo of Kevin Sanjaya Sukamuljo and Marcus Fernaldi Gideon, who also finished at the top in the Race to Tokyo standings, and world No. 3 Chinese Taipei pair of Lee Yang and Wang Chi-Lin.

England's Ben Lane and Sean Vendy are the fourth pair in Group A.

"The draw is quite competitive but if you want to play in the Olympics and want to reach the later stages, you have to beat the best in the world, so we are taking it as a challenge," he signed off.